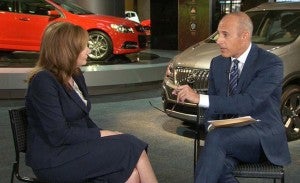 A well-orchestrated Thursday morning talk show appearance by General Motors CEO Mary Barra has created an unexpected furor – but not for the executive, nor for the embattled automaker, but for Today Show host Matt Lauer.

In-between questions about GM’s recall woes, Lauer questions whether Barra – the first women chief executive at a major automaker – was there simply to put a softer face on the maker’s problems. He then asked whether she could handle the job while still being a good mother to her two children.

That has set social media services like Twitter and Facebook ablaze, much of it coming in the form of what many have called “sexist” comments by Matt Lauer. Detroit Free Press columnist Tom Walsh, for example, blasted Lauer for asking a question he likely wouldn’t pose to male executives such as Ford Motor Co. CEO Alan Mulally.

“You’re a mom I mentioned; two kids. You said in an interview not too long ago that your…kids said they’re gonna hold you accountable for one job, and that is being a mom. Given the pressures of this job at General Motors, can you do both well?” Lauer asked during the highly-rated NBC program, Barra assuring him she could do both.

For his part, Lauer defended his approach to the interview, noting in a later Facebook posting that he was referring to a Forbes magazine interview in which Barra herself discussed the challenges of raising a family and how she had missed her son’s prom because of her executive duties.

“It’s an issue almost any parent including myself can relate to. If a man had publicly said something similar after accepting a high-level job, I would have asked him exactly the same thing,” Lauer posted, referencing a segment Today had recently aired on “Modern Dads,” and the challenges they face today balancing business and family life.

The question about being a good mother might have been more acceptable had Lauer not also have questioned Barra about, in effect, being a shill to try to defer the impact of the GM ignition switch recall – which was announced barely six weeks after she took office as GM’s new CEO, replacing the much more blunt Dan Akerson, a one-time Navy officer, who unexpectedly retired at the end of the year.

(Another recall at GM – this one linked to troubled airbag supplier Takata. Click Here for the story.)

For her part, Barra remained cool, responding “Well, that is absolutely not true,” she told Lauer. “You know, I believe I was selected for this job based on my qualifications.”

Lauer, some critics quickly noted, is the father of three who has traveled extensively and sometimes for weeks at a time, including his recent stint anchoring from the Sochi Olympics in Russia.

In his blog post, Lauer suggested, “I hope we can continue the discussion.” Likely, that will happen, though apparently not on his terms.