Industry is in “the position since well before the Great Recession.” 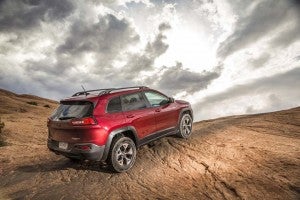 Demand for the new Jeep Cherokee is leading the way for Chrysler's strong sales performance.

Neither the threat of rising gasoline prices nor the distraction created by the World Cup tournament has short-circuited the U.S. new vehicle market this month, according to industry analysts and executives – though the recent, torrid pace has slowed a bit.

Preliminary estimates call for a modest gain for June of perhaps 1% or so, overall, with the Seasonally Adjusted Annual Rate of sales, or SAAR, expected to reach around 16.4 million, not far under the industry’s peak of a decade ago.

That’s a position echoed by other industry insiders.

“The U.S. auto market is arguably in the best position and health it has been in since well before the Great Recession,” said Jeff Schuster, senior vice president of forecasting at LMC Automotive. “Sales are robust and stabilizing above a 16-million-unit pace and are back in balance with production levels, keeping inventory in check.”

While the country’s GDP growth remains below ideal levels, the auto market continues to be instrumental in helping drive the economy, added Schuster.

“Summer selling season is off to an even better start than last year, despite one fewer weekend this June,” said John Krafcik, president of TrueCar. “Strong retail sales and stable incentive spending heading into the heart of summer give us confidence that 2014 will be the best year for automakers and dealers since 2007,” Krafcik said.

Chrysler, Hyundai and Kia, Nissan and Toyota are all expected to post sales increase for the month of June, according to the estimates prepared by TrueCar, while Ford, General Motors and Volkswagen will lose ground.

Ford and VW are both caught in “a bad place in their product lifecycles,” however, waiting for new or updated models, according to TrueCar executive vice president Larry Dominque. Ford should benefit from the flood of new models to come for 2015. VW may have a bit longer-term challenge.

(Ford aims to edge out the competition with all-new 2015 Edge crossover. Click Here for a closer look.)

TrueCar expects GM will be off by as much as 3%, but that number isn’t cause for worry, stressed Dominique. For one thing, it has trimmed back low-profit fleet business. And, he noted, GM unexpectedly cut its average incentive by 11% per vehicle in June.

“(GM CEO Mary) Barra may be trying to show how strong GM is,” that it can reasonably maintain volume and share at a bad time. “She’s not throwing cash out” at the problem, he said.

Chrysler, meanwhile, is in a great place. “Chrysler will be up double-digits again. Having the (Jeep) Cherokee back in the line-up is a big boon for them,” he added.

With the combination of May’s strong performance and June holding above the year-to-date selling pace of 15.9 million units, LMC Automotive is raising its 2014 light-vehicle retail sales to 16.2 million units from 16.1 million.

Supporting volume above 16 million units is a 55% increase in new-model activity in 2014 from 2013. Virtually every vehicle segment has fresh models in dealer showrooms, with activity in the small premium car and SUV segments accounting for more than 10% of all new models.

Sales and trucks and utility vehicles are helping to drive the continuing expansion of vehicle sales, despite the threat of rising gasoline prices created by the new crisis in the Middle East where radical Muslim groups have seized oil field and wide swatch of territory in Iraq.

New-vehicle production in North America through May has increased 2.5%, compared with the same timeframe in 2013.

(Toyota shows off new fuel cell vehicle. Click Here to check it out.)

Strong sales in May helped manufacturers continue to clear inventory, as days’ supply fell to 60 days from 69 days, overall inventory decreasing by 125,000 units. Every major manufacturer, with the exception of Daimler, has been able to reduce or maintain inventory levels from April, Schuster said.