Breaking bottlenecks is critical as the new 2015 Sonata rolls out. 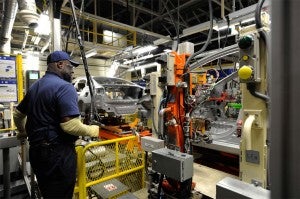 The body of a new 2015 Hyundai Sonata rolls down the assembly line at the Alabama plant.

Hyundai has begun delivering the new 2015 Hyundai Sonata to dealers across America from its bustling assembly plant in Montgomery, Alabama, a factory stretched well beyond its rated capacity as the Korean carmaker struggles to keep up with consumer demand.

The Montgomery plant, which has 3,000 employees, now operates on three shifts five days per week and last year built a total of 398,000 vehicles – nearly 100,000 more than what it was built to handle when it opened a decade ago.

Dave Zuchowski, president and chief executive officer of Hyundai Motor America, noted the ability of the Montgomery plant to expand production beyond the rated capacity has been critical to Hyundai’s ability to meet customer demand in recent years.

Even then, Hyundai could use more capacity in the U.S., noted former Hyundai CEO  John Krafcik, who left the company last December. But Hyundai has added employees to staff three shifts at the Montgomery plant to increase the utilization of the $1.7 billion assembly complex, which contains a highly automated stamping plant and an engine plant, as well as its assembly line. 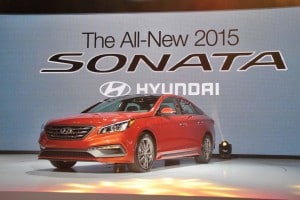 The 2015 Hyundai Sonata debuted in New York with a toned-down design compared to the prior generation.

“We’ve really pushed the plant hard,” Zuchowski told reporters during a tour of the complex marking the launch of the 2015 Sonata.  “We’re having a hard time keeping up with demand and the ability of this plant to overproduce is critical.”

The launch of the Alabama assembly line marked a significant transition for Hyundai, and demonstrated that it could be competitive without having to rely on the cheaper wages of its plants back home. A full 50% of the vehicles Hyundai sells to its American customers now are built in the U.S., Zuchowski noted, either in Montgomery or at another plant in West Point, Georgia, which is operated by its partner Kia. That plant is 81 miles east of Montgomery.

Zuchowski said Hyundai sold more than 700,000 vehicles in 2013, and while it may not pick up market share, it expects to boost U.S. demand to a record 745,000 this year.  The plant also has been critical in Hyundai’s efforts to establish a reputation for building quality vehicles, the CEO said.

“We have been building really good product for a very long time,” said Zuchowski, who pointed out that the company’s claims are now supported by a long string of third party endorsements – most recently in J.D. Powers’ closely watch Initial Quality Survey, where it was the highest-ranked mainstream brand.

“We ended up fourth behind Porsche, Jaguar and Lexus,” said Zuchowski, who noted the Hyundai brand’s growing reputation for quality is helping attract new customers and help it shift its image from that of an economy brand to one that emphasizes value.

“We know we are attracting completely different buyers than we did,” Zuchowski said, “and loyalty has helped accelerate our growth.”

Zuchowski said the sixth generation Sonata, which is now being replaced by the 2015 model, was a “breakthrough” vehicle for Hyundai.  “For the first time ever we became relevant,” he boasted.

The average age of the typical Sonata buyer has dropped from 61 to 56 and the household income has increased from $77,000 t0 $81,000.   In another sign of the Sonata’s appeal, buyers also become more diverse.

(Click Here for a review of the all-new, 2015 Hyundai Genesis Sedan.)

Ashley Frye, vice president of production, said the quality of the new Sonata has everything to do with the future brand image of Hyundai in North America.

“To continue this momentum, the 2015 Sonata sedan must be delivered to Hyundai dealers with zero issues from the assembly process,” Frye stressed. “Our Team Members have the control to stop a quality issue in its tracks, they have the responsibility to install a component the right way or reject a supplier part that does not meet our quality standards.”

Hyundai executives describe the highly automated plant as one of the most modern ever built. The plant’s integrated stamping operation is completely automated, as is the body shop, which includes 280 robots, which build and weld the underbody and front structure as well as the floor pan and roof.  The plant’s paint shop is also highly automated.

The longer-term question is whether Hyundai will need to expand the Alabama operation – or add a new facility. The maker isn’t talking about its future plans, but it has made it clear that even by boosting the factory’s output it is struggling to meet U.S. demand. So, if it expects to match the pace of the overall U.S. automotive market’s growth, Hyundai may have to make some decisions in the very near future.