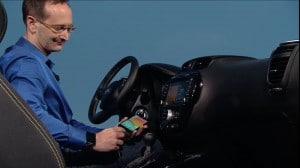 The battle between Apple and Google has moved to a new arena: the car. Google introduced Android Auto yesterday with features aimed at bringing the functionality of an Android-based phone to 25 automakers by the end of the year.

“We looked at what people do with their phones in the car today, and these things stood out to us: navigation, communication, music and other forms of streaming music,” said Patrick Brady, director of Engineering, Android, during the Google I/O conference yesterday.

“Android Auto puts these front and center so you don’t have to go hunting through a grid of icons to find the apps that are most important to you when you’re in the car.”

The system takes the apps on the driver’s Android-based phone and optimizes them for use in the vehicle. Android Auto is Google’s response to Apple’s CarPlay, which was introduced earlier this year.

With Google’s system you’ll get navigation through Google Maps, streaming music from Spotify as well as the ability to send and receive texts while driving. The last item can be done with voice controls allowing drivers to keep both hands and eyes on the road.

“It looks and feels like it’s part of the car,” Brady noted, adding that since drivers are using their phones, each set up is personalized. Additionally, it will get faster as apps are improved and drivers get newer, faster phones.

However, there is one catch: the phone must be connected to the car’s infotainment system using a USB connection: no Bluetooth connectivity is available.

Brady said this was, in part, by design so drivers are forced to put their phones down and rely on the vehicle’s already existing controls to interact with the system. He noted that an estimated 25% of all car accidents are a result of the driver using a smartphone or some interactive device that distracted them from driving.

Several makers have signed on to offer the Android Auto System by the end of the year, including Acura, Infiniti, Mazda, and Renault, as well as most of the Fiat Chrysler and Volkswagen (except Porsche) line-ups.

(Click Here to get more info about the furor or Matt Lauer’s “mom” question.)

However, there are 12 automakers that will offer customers a choice of either the Apple or Google systems. This list can be expected to grow, as automakers are unlikely to want to lose any customer because he or she prefers Google to Apple or vice-versa.

(To see more about Daimler and Nissan’s new plant in Mexico, Click Here.)

The next question is how pervasive will Google’s reach in vehicles be? In addition to providing navigation, communication and entertainment options, the system could provide other information to drivers, such as the status of the car’s mechanicals. It could let the driver know if the tire pressure is low or if a turn signal is burnt out.

According to the company, they are in discussions with automakers to determine what information they can legally access and pass along. Additionally, the tech company has produced something call Android Auto SDK, which will let app developers optimize their apps for use with Android Auto.