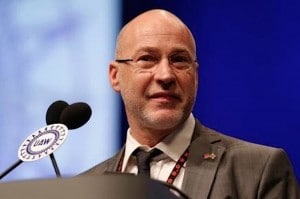 Frank Patta, general secretary, Volkswagen Global Group Works Council, told the 1,100 delegates to the United Auto Workers Constitutional Convention today in Detroit that the VW council will continue to support the UAW’s efforts to organize workers at the VW plant in Chattanooga.

“We want people to have a strong voice and that is why we will continue to work for a strong union and works council in Chattanooga,” said Patta, whose remarks were translated into English from German for delegates. “This is because without the union and works council the workers are at the mercy of management. This is the model that we want to see applied in the U.S. and in Chattanooga.”

The VW Global Works Council and Patta’s union, IG Metal, helped the UAW throughout the ill-fated organizing drive at VW’s Chattanooga plant that ended UAW narrowly losing the vote, 712 to 626.

“The election has been stolen from us,” said Patta, who noted while VW’s management was neutral, right-wing and conservative groups spent millions of dollars to campaign against the UAW and to inject an element of fear into the election.

Despite the heavy-handed campaign launched in a small town, the union lost by only 44 votes, noted Patta, who had been the leader of the IG Metal’s giant local at Volkswagen’s big plant in Wolfsburg, Germany. The anti-union campaign “in front of the plant gate in Chattanooga,” included vicious billboards, radio spots and press conferences all designed to spread fear.

The UAW, however, can ask for a new vote next year and it can count on additional support from its German colleagues and other VW works councils around the world.

“We continue to fight for worker representation,” said Patta, noting that works councils exist in 105 VW factories around the world not only in Europe and South America, but also in China, India and Russia.

(Click Here for details about Hyundai taking on BMW with new AG sedan.)

Patta said the VW Global Works Council will also continue to support the UAW’s efforts to organized non-union plans throughout the South. During the past four years, the UAW has mounted a major effort to enlist the support of union from around the world in the organizing efforts in the South where a combination of anti-union activism, culture and corporate initiatives have kept union organizers at bay over the past two decades.

“The United States is one country. We can’t tell people in one part of the country that they can’t have the right to representation,” added Patta, who said the lack of representation in the South translates into lower wages for the employees and a reduced standard of living.

Patta said he hopes that success is organizing workers in Chattanooga will also serve as a model for setting up works councils at other plants across the southern part of the United States, which are now uniformly non-union.

“We have a vision. We want this model to spread to the whole of the South. This is our vision and our dream,” he said.