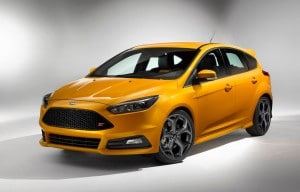 The new 2015 Ford Focus ST gets a lower, wider stance to improve handling and give it a more aggressive look.

Ford introduced the 2015 iteration of its Focus ST pocket rocket at the Goodwood Festival of Speed in the United Kingdom.

The Festival of Speed, or FoS as it’s known in England, is an annual hill climb featuring historic motor racing vehicles that is held in the grounds of Goodwood House, West Sussex, England.

The Dearborn, Michigan-based maker has put out some form of the high performance Focus ST since 2002 selling more than 140,000 of the speedsters worldwide. 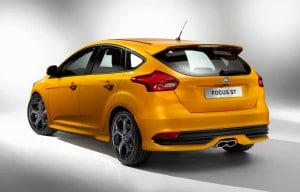 The new Ford Focus ST puts out 252 horsepower and the company has sold more than 140,000 of the pocket rockets globally.

“Now, with improved dynamics, an updated suspension, new styling and a more sophisticated cabin, we expect the 2015 Focus ST will remain the hottest hatch worldwide.”

The engine is paired exclusively with a six-speed manual transmission with a performance-oriented, short-throw shifter. The gear ratios – exclusive to ST – deliver rapid acceleration in lower gears and comfortable cruising at speed.

While it’s always had plenty of oomph, Ford’s team has focused on improving the handling characteristics of the ST. The sports suspension features all-new front springs and sportier shock absorber tuning front and rear to deliver even sharper dynamic performance. The electric power-assisted steering has also been revised to provide the driver with improved steering feel, the maker said. 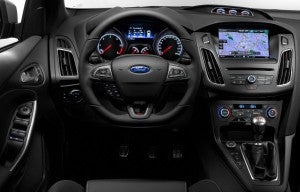 The 2015 Focus ST gets a new flat-bottomed steering wheel to improve clearance while driving.

The latest version boasts a lower, wider stance, a new dynamically sculpted hood, slimmer headlamps and rectangular fog lamps, which give it a more aggressive look.

(Click Here for details on expectations for June auto sales.)

The sports body kit also includes body‑colored side skirts and diffuser elements either side of the exhaust, and a rear roof spoiler optimized for aerodynamic performance. All new Focus ST models feature twin-hexagonal center tailpipes.

(To see more on the 2015 Focus ST introduction, Click Here.)

“The design of the new Focus is stronger and sportier, and that allowed us to make the new ST even more aggressive and dramatic,” said Moray Callum, Ford group vice president, Global Design. “The front bumper is deeper, the honeycomb upper grille is higher and more upright, and the lower grille is larger. The deeper rear bumper really emphasizes the width of the car.”