Maker looking to draw buyers from other luxury brands. 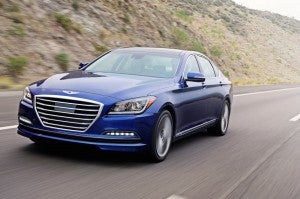 With the 2015 Hyundai Genesis, the automaker is looking to attract new luxury buyers wanting a good deal as well as plenty of opulence.

Hyundai has grabbed market share since the recession by offering consumers a little bit extra at a very attractive price that confounds the competition.

The South Korean automaker also is ambitious. So while it started out building small cars that stressed affordability and fuel efficiency, it has also shown a deft touch in the mid-sized and even luxury segments where it is challenging the premium brands such as Lexus, Cadillac, Audi, BMW and Mercedes-Benz with the 2015 Hyundai Genesis.

The Genesis is a large rear-wheel drive sedan that delivers distinctive styling, ample power, some of the very latest technology as well as solid ride and handling for a price, $38,000, that is less than what you would pay for an established luxury brand. 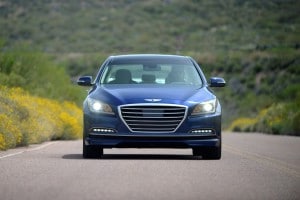 The 2015 Hyundai Genesis got an exterior makeover for the second generation model.

Since the end of the Great Recession, Hyundai has developed a reputation for delivering cars with eye-catching styling, and the exterior design of the 2015 Genesis only serves to enhance the company’s position as a trendsetter.

Hyundai’s has even developed a name for its distinctive design philosophy, Fluidic Sculpture, and it serves the new version of Genesis well. It endows it with sensuous lines that invite an observer’s eye to cling to the sleek profile. Both the rear and the front of the Genesis also have been neatly tailored to match and enhance the car’s bold profile.

The grille is eye-catching, but not gaudy. The clever treatment of the headlamps, which utilizes the latest development in headlight technology, serves to underscore the Genesis comes to showrooms with its own distinctive face that adds to overall character of the vehicle.

The same care and thought also has been applied to the design of the interior. In the past, Hyundai had a penchant for putting too much clutter into the cockpit. The instrument panel and center stack have a cleaner, more sophisticated look that is actually more functional and easier to use out on the road.

The overall comfort of the cabin in the Genesis is enhanced by the generous amount of space – slightly more than rival vehicles in the same class. There is more than enough head and shoulder room for adults and the seats remain comfortable, even on a long drive. 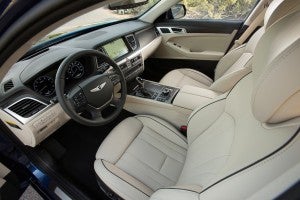 The new Hyundai Genesis features more interior room than its competitors and plenty of luxury touches demanded in the segment.

Hyundai also has been aggressive in equipping its cars with the latest in in-car connectivity and the version of the Genesis that I drove was equipped with Bluetooth, navigation, multiple entertainment channels, such as satellite radio as well as a compact disc/MP3 player.

The new Genesis also has a complete complement of safety equipment, including a total of nine airbags as well as electronic stability control and the backup camera. Daytime running lights come standard and Hyundai is offering driver assistance features such as a lane departure warning system. Whenever the system is activated, the steering wheel vibrates and a warning light alert drivers about the need to reposition the car.

The chassis also has been stiffened to provide both additional crash protection and improved ride and handling. Hyundai’s suspensions have been criticized in the past. But the upgraded suspension system on the Genesis handles different road surfaces and corners very nicely. The steering system with its electric boost also has been nicely calibrated so the driver gets feedback from the road and the corners.

Hyundai is also offering two different engines in the Genesis, 3.8-liter V6 motor, which delivers 311 horsepower and 293 foot pounds of torque, is the standard engine and delivers more than enough punch for prevailing driving conditions as it brings the car up to speed very quickly in passing situations or coming down a freeway on ramp. The optional 5.0-liter V8 delivers 420 hp and 383 foot-pounds of torque.

Both the V6 and the V8 engines are matched up with an eight-speed transmission and both can be matched with Hyundai’s optional all-wheel-drive system, dubbed HTRAC in the company’s marketing materials.

The 2015 Genesis is a very good and very well-equipped at each price point, offering even more standard equipment than the previous car from the South Korean automaker, carrying the Genesis name. Whether it can actually lure motorists out of their Cadillacs and BMWs, however, is a very tall order.

Hyundai’s real objective is pretty clear. It wants to entice consumers, who have never had a luxury vehicle but might be thinking of getting one now, to look their way because the company is confident they will be impressed.