Recall for 2012 SUVs for airbag issue at center of query. 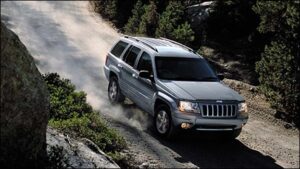 The 2004 Jeep Grand Cherokee is one of several models subjected to a recall in 2012 that is under investigation again.

The spotlight of the National Highway Traffic Safety Administration is now being shone on Chrysler and its 2012 recall of more than 740,000 SUVs due to an issue with airbags and the repairs made to them.

Six owners of the vehicles repaired for the problem have had airbags deploy without explanation. According to the safety agency, no deaths have resulted from the deployments, but some burns and other injuries have been reported.

At the time of the recall, there were 215 reports of airbags deploying without cause resulting in 81 injuries. Once Chrysler announced the recall, the agency ended its investigation. However, with the new reports, NHTSA reopened the investigation to make sure the fix actually worked.

(Ford recalls 1.4 million as industry closes in on record. For more, Click Here.)

Chrysler, at this point, has suggested that a change made by a supplier is the cause of the deployments. The automaker is working with the investigation.

(Click Here for details about Toyota’s three recalls in 24 hours.)

NHTSA’s activity level has increased in recent months in light of the issues surrounding General Motors and its faulty ignition switches. GM has issued recalls for more than 15 million vehicles since the beginning of the year.

(To see more about the expected flood of GM recalls, Click Here.)

Last week, Ford recalled 1.4 million Ford Escapes, Mercury Mariners, Ford Explorers and Ford Tauruses for a variety of issues. The industry has recalled more than 20 million vehicles this year and is rapidly closing in on the one-year record for recalls of 30.4 million in 2004.