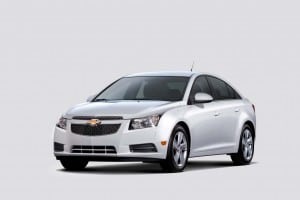 The Chevrolet Cruze is the latest products to have problems with faulty Takata airbags.

This story has been updated with additional information on the number of vehicles covered by the stop-sale.

General Motors has issued a “stop sale” to its dealers advising them to stop selling any 2013 and 2014 Chevrolet Cruze sedans on their lots due to a potential airbag defect, with a recall likely to follow, according to several company sources.

That announcement comes just days after Nissan, Honda and Mazda were forced to recall 3 million vehicles worldwide due to airbag problems – a continuation of a recall that has, over the last year, impacted about 10 million vehicles, making it one of the largest ongoing safety issues in automotive history. Toyota had to expand an airbag recall of its own earlier this month.

GM spokesman Jim Cain confirmed the stop sale and noted that the maker estimates about 33,000 vehicles are involved, some, but not all, Cruze sedans produced during the 2013 and 2014 model-years.

According to company insiders, the issue centers around a manufacturing defect, the airbags using an incorrect part that could impact its performance. That differs from the other big airbag recall which was blamed on improperly manufactured chemicals used for the explosive device that inflates the bags in the event of a crash.

(For more on the Honda, Nissan and Mazda airbag recall, Click Here.)

But both the big airbag recall and the GM stop sale have something in common: in each instance, the faulty devices were produced by the Japanese safety systems supplier Takata Corp., GM spokesman Cain confirmed.

Ironically, the latest development comes two days after Takata CEO Shigehisa Takada and Chief Operating Officer Stefan Stocker issued a statement from Japan declaring, “We will aim to further strengthen our quality control system and work united as a company to prevent problems from happening again.”

Though the Japanese supplier might be at fault, it comes as yet another body blow to General Motors which has so far this year recalled about 17.7 million vehicles in the U.S., and more than 20 million worldwide for a wide range of safety-related problems, including fatally flawed ignition switches blamed for at least 13 deaths.

The industry as a whole, meanwhile, has been on a recall blitz and, as of this week, manufacturers have collectively recalled about 31.4 million vehicles in the U.S., about 2 million short of the all-time, full-year record set in 2004.

(Why is the industry heading for a recall record? Click Here to find out.)

The problem with the late-model Chevy Cruze sedans likely will not push the total over the top and into a new record, but GM expects to recall the vehicles equipped with the faulty part. The stop sale gives the maker time to review data from Takata to determine precisely which vehicles might be affected. Only some of those covered by the order will likely need repairs. But GM also expects to have to recall vehicles that have already been sold.

(Is your car concealing a deadly defect? One in four owners never complete recall repairs. Click Here for the story.)

This is the second time GM’s popular Cruze line has been the target of a stop sale. In late March the maker put sales on hold while it determined the extent of a problem with front-wheel-drive half-shafts. It followed with a recall days later.

As for Takata, the supplier’s problems have lately forced recalls at a broad list of major automakers, including GM, Toyota, Honda, Nissan, Mazda and BMW. Separately, it has been in trouble for corruption at its U.S. operations, four executives convicted in a price-fixing scam, with a fifth indicted this month.  The company itself ousted its U.S. president last year and paid a $71.3 million fine to settle the Justice Department investigation.