New factory will produce both Mercedes-Benz and Infiniti models. 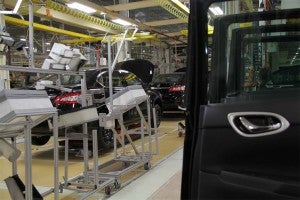 Nissan opened up its Aguascalientes plant last year. But it left plenty of room to expand once it locked down its joint venture with Daimler's Mercedes-Benz.

Nissan Motor Co. and Daimler AG will announce a significant expansion of their four-year-old alliance this morning, the two partners planning to set up a new plant in Aguascaliente, Mexico that will produce small luxury cars for the Japanese maker’s Infiniti brand and the German manufacturer’s Mercedes-Benz.

The project, first reported last year by TheDetroitBureau.com, takes the three-way partnership between Daimler, Nissan and French automaker Renault to a significant new level. The maker’s initially agreed to jointly produce engines and, among other things, develop a small car platform to be used for both Daimler’s Smart brand and as a replacement for the little Renault Twingo. Just this week, a new Nissan plant in Decherd, Tennessee launched production of engines for both the Infiniti and Mercedes brands.

The new luxury car plant will be set up alongside an existing assembly line Nissan opened in the central Mexican city of Aguascalientes next year. Nissan CEO Carlos Ghosn and Daimler CEO Dieter Zetsche has previously both confirmed they were discussing the possibility of a new joint production facility but insiders say it took longer than expected to work out the details.

Specific details of the venture are to be announced in Mexico City this morning. But it is expected that the venture will utilize a new small car “architecture” developed by Mercedes for such new compact model lines as the CLA sedan and GLA crossover-utility vehicle. One or both models are likely to be produced in Aguascalientes, along with several small Infiniti models now under development, including the planned Q30. 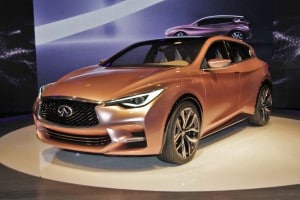 A concept version of the Infiniti Q30.

The Japanese brand has long been relegated to the second tier of the luxury market, but Nissan is making a concerted effort to boost sales and share by upgrading and expanding its existing line-up. To help build momentum, Nissan has given Infiniti significantly more autonomy – moving its global headquarters to Hong Kong – while also giving the luxury brand its own engineering and design resources.

While it might seem odd to have Mercedes helping a potential competitor, CEOs Ghosn and Zetsche have repeatedly said they do not see the two luxury marques as direct competitors. But by sharing production – and by tapping into Nissan’s existing Mexican supplier and distribution network, the two partners hope to significantly increase their economies of scale, lowering costs.

(Nissan Concept 2020 Vision offers a “hint” of what the next GT-R will likely look like. Click Here for more.)

Renault entered into an alliance with Nissan in 1999, helping the Japanese maker fend off a looming bankruptcy. Ghosn later became CEO of both companies. Daimler joined as a more limited partner in 2010, Zetsche saying the German maker had learned a lot about how to make an alliance work as the result of its failed “marriage of equals” with Detroit-based Chrysler. 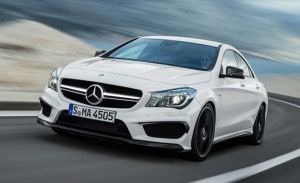 Mercedes is already using its compact architecture for models such as this CLA 45 AMG.

The two chief executives have said they will continue to look for new opportunities as long as they make sense for all three makers. They have also been looking for further alliances, bringing in Ford for a joint fuel cell development project.

The new Mercedes/Infiniti assembly plant will put a further spotlight on Mexico’s expanding role in the global automotive market. Taking advantage of its low manufacturing costs – and the fact that the country has lined up more free trade agreements than any other country but Israel – Mexico has been scoring one new production plant after another. With the recent opening of a Honda plant, the expansion of a Volkswagen facility, the upcoming launch of a new Audi plant and others on the way, many analysts anticipate Mexico will soon be the fifth-largest national automotive production base in the world.

(New Audi plant rises out of the Mexican dust. Click Here to find out what the maker has planned.)

Among those eyeing their own operations in Mexico is Mercedes’ rival BMW which has said it will decide on a second North American factory site before the end of July.