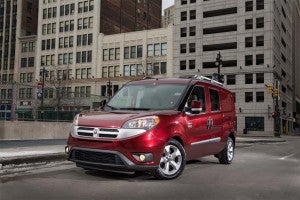 The new Ram ProMaster City is based on a modified Fiat Doblo compact van platform.

They may not have the visual appeal of a Dodge Challenger or Chrysler 300, nor the macho draw of the big Ram 1500 pickup, but there’s a sizable and growing market for small work vans that Fiat Chrysler hopes to tap into as it readies the launch of its new Ram ProMaster City.

Based on the European Fiat Diablo, but heavily updated for the North American market, the new ProMaster will take direct aim at Ford’s recently updated small world van, the Transit Connect.

Like the Transit Connect, the new Ram van uses a front-drive powertrain layout to help maximize cargo space, and the ProMaster City will be offered in two different lengths when it goes on sale in the U.S. early next year.

Targeting the compact Class 1 van segment, Ram hopes to appeal to small business owners, whether plumbers, caterers or florists with a package that boasts both flexibility and a low cost of ownership. But the ProMaster City also will be available in a passenger van configuration that could appeal to van conversion firms. 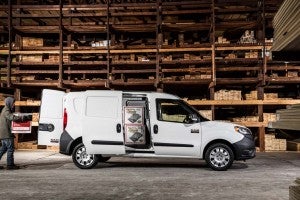 Ram aims to win buyers with a mix of cargo capacity, flexibility and low operating costs.

“As businesses strive for lower costs, the demand for a smaller, more efficient van has increased and Ram Commercial is answering the bell with the all-new ProMaster City,” said Reid Bigland, President and CEO of the Ram Truck Brand.

The U.S. side of Fiat Chrysler Automobiles is betting that the Diablo provides a good starting point for a North American van. The Fiat model has been a two-time International Van of the Year winner, with total sales of 1.3 million Doblos to date. But the van has been updated in a number of key areas to adapt for regional needs – and to give it more of the familiar Ram brand look.

By going with a unibody design, Ram was able to reduce curb weight and increase payload capacity to 1,883, which it claims is a segment best. The wheelbase is a long 122.4 inches, which allows for a lot of usable interior space. And with a width of 48.4 inches between the wheel wells, a palette or sheet of four-feet plywood can lay flat. There’s 60 inches of width above the wheel wells.

(Are you driving a vehicle with a deadly, hidden safety defect? Click Here to find out.)

The cargo’s vertical walls are 52 inches tall, and there’s seven feet of space between the rear doors and the back of the commercial version’s passenger seats. Those 60/40 split rear doors normally open to 90 degrees but, with a touch of a button, swing a full 180 degrees for easy dock loading.

In the passenger configuration, the van gets a 3-seat second row.

To improve ride and handling, the ProMaster City swaps out the leaf springs normally used in small commercial vans for an independent, coil-spring, bi-link rear suspension. The van also is the first to offer a 9-speed transmission, the same automatic gearbox used in the new Dodge Dart and Jeep Cherokee models. It’s mated to a 178-horsepower Tigershark 2.4-liter inline-four making 174 pound-feet of torque.

The Ram ProMaster City makes a number of interior changes from the Doblo, including a bin atop the center stack and an additional shelf above the glovebox.

The new van adds a number of safety systems, including both a backup camera and ultrasonic parking sensors. There’s also an optional Uconnect infotainment system, with its 5-inch screen, satellite radio and navigation., and Bluetooth for hands-free calling.

Ram hasn’t yet released fuel economy numbers or pricing for the ProMaster City, but the competing Ford Transit Connect starts at $23,995.

(Despite analysts’ concerns, Ford says aluminum F-150 launch is on track. Click Here for the latest.)