Export market is a target. 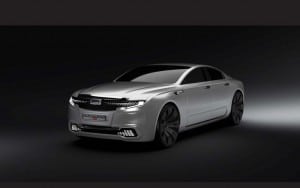 While it hasn’t been around all that long, its short history hasn’t stopped Qoros from trying to imagine what it could be like in the not-too-distant future.  And if the maker’s new Qoros 9 Concept is any indication, it expects to be targeting the fast-growing Chinese luxury car market.

Qoros debuted barely a year ago as a joint venture between China’s Chery Automobile and the conglomerate Israel Corp.  The two partners have made it clear that they view Qoros as a global manufacturer, and one that won’t follow the typical pattern for emerging Asian makers, targeting the low end with cheap econoboxes.

The Qoros 9 is billed as a possible flagship sedan that could come to market by 2020 and, at least visually, it has all the right cues, such as the long nose and coupe-like roofline that flows into a tall, short deck, as well as a high beltline and Xenon lamps framed by LED accent lights. The tail, meanwhile, features a semi-circular LED lamp assembly that focuses the eye on an oversized “Q” logo.

Picking up on an increasingly popular theme, The Qoros 9 Sedan Concept has no traditional sideview mirrors, opting instead for high-definition rear-view cameras mounted within the LED side indicators just below the base of each A-pillar.

(Volvo could be first major maker to export cars from China. Click Here for the story.) 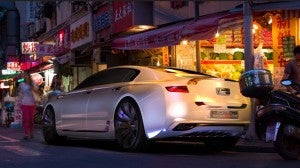 This rendering shows the distinctive lighting design on the tail of the Qoros 9 Concept.

What’s unusual about the Qoros 9 Concept is that it’s the work of a 29-year-old Korean intern who spent five months in Shanghai alongside Qoros’ house designers. Jihoon Seo’s thesis, if you will, was unveiled at his alma mater, the Coventry University School of Art and Design.

“Qoros is a rapidly growing brand and we are dedicated to helping and educating young, up-and-coming talent. Finding the very best talent will be a crucial success factor for our company in the future,” said the Chinese maker’s Director of Design, Gert Volker Hildebrand. “Jihoon is the eighth design intern we have welcomed at Qoros in just the past few years and we will continue to offer internships to the brightest students.”

It might be just a student design, but the Qoros 9 Concept shouldn’t be lightly dismissed. While it may be based in China, now the world’s largest automotive market, Qoros has a very serious goal of become a truly global player – something that has so far eluded its home market competitors.

The original Qoros 3 sedan is already being exported to Slovakia, and the company’s return to the Geneva Motor Show earlier this year signaled its interest in spreading out to other parts of Europe over the next few years.

(China likely to be the key market for new Lincoln MKC crossover. Click Here to find out why.)

Significantly, the sedan last year earned a five-star rating in Europe’s NCAP crash tests, something no other Chinese product has come close to.  Meanwhile, Idan Ofer, the billionaire head of Israel Corp., told TheDetroitBureau.com that Qoros has other surprises in mind, notably a goal of matching the quality levels of key overseas competitors. “Nobody expects a Chinese company to be able to deliver this quality,” he said.

While many Chinese makers have been eyeing the U.S. market as the ultimate prize, Ofer has said that the American market is “secondary” to Qoros, which will focus on Europe, at least initially. That said, he acknowledged “I could change my mind” if he sees an opportunity in the U.S.