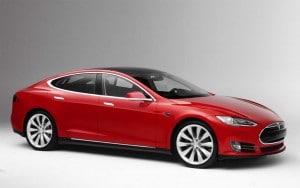 Despite its stock rising more than 40% this year, Standard & Poors gave Tesla's $2.9 billion of debt a junk rating.

It may be the darling of Wall Street investors, but financial ratings agencies are far less smitten with California battery-carmaker Tesla Motors.

Standard & Poors gave Tesla’s $2.9 billion debt a rating of B-, which is considered “junk,” based on concerns about the company’s viability in the long term. Tesla boasts a market cap of $26 billion, which is almost half that of General Motors and more than a third of the value of Ford.

“This is an unsolicited rating from S&P that was developed independently by their analysts without any feedback from Tesla on our growth plans,” a Tesla spokeswoman said.

The unsolicited rating was not unexpected for a company still in its infancy. Though the traditional U.S. automakers have now been profitable for the last four years, GM and Fiat Chrysler still have junk bond status on their debt from S&P. Ford was only upgraded to the lowest investment grade rating last August.

The impact the rating will have on possible investors is unclear. While it may deter many pension funds from investing in Tesla, there are several other investment funds that specialize in holding investments that are rated as junk by rating agencies.

S&P cautioned it was concerned about “Tesla’s niche and independent market position,” S&P, the world’s largest credit-rating company. Tesla has a smaller scale relative to peers, a narrower product focus, and limited demand for its products, according to S&P, which also said Tesla’s finances appear stable.

(To see if Hindustan Motors can revive its long-running Ambassador, Click Here.)

The gains in Tesla shares have slowed this year after the company reported first quarter Model S sales this month that fell below top-of-the-range analyst estimates but are still up 41% since Jan. 1 despite recalls and slower than expected sales. The company also delivered its first eight Model S sedans to buyers in China.

Tesla also has developed a history of surprising outside observers, who have been skeptical of the company’s development since it was established in California by billionaire entrepreneur Elon Musk nearly 10 years ago.