U.S. makers closing in on high-water mark of 30.4 million. 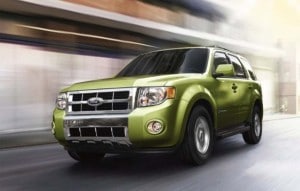 The Dearborn, Michigan-based maker is recalling 1.1 million Ford Escapes, Mercury Mariners and Ford Explorers for power steering issues. The recalls are coming as U.S. and Canadian safety regulators step up the pressure on companies in light of General Motors’ current issues as well as other substantive problems by automakers in the recent past.

Ford recalled 915,000 2008-2011 Escapes and Mariners in North America under pressure from Canadian officials.

The automaker informed the National Highway Traffic Safety Administration of five crashes and six injuries in U.S. crashes related to the issue. Ford said because of poor signal-to-noise issues in the torque sensor, the vehicles’ power steering system may shut off and default to manual steering, which could make it harder to steer and lead to a crash.

Ford is also recalling 195,500 2011-2013 Explorers in North America – 177,500 in the U.S. – for a potential electrical issue in the steering gear that may result in the loss of electric power steering assist while driving.

In this situation, the steering system reverts to manual steering mode, making the vehicle more difficult to steer, especially at lower speeds. If it happens, drivers will hear a chime and see a message in the instrument cluster, Ford said.

This brings the total number of vehicles recalled in the U.S. to more than 21 million this year.

Brian Johnson, an analyst with Barclays, issued a report last week saying he expected GM to continue issuing recalls at a rapid pace through mid-summer.

“It is tough to say if recalls from past vehicles has already peaked, as the team has not yet completed mining the data,” it has been gathering, Johnson wrote following the meeting in Detroit.

“Also, given the data-mining is being conducted on an issue by issue, and not on a make and model-year basis, it is possible that GM may issue further recalls for vehicles which have already been recalled.”

(Click Here for details about the expected flood of GM recalls through summer.)

GM alone has recalled more than 13 million vehicles this year, but Toyota is the second manufacturer in terms of total vehicles impacted by callbacks. It has led the recall list for five of the last six years, in fact, and was second only behind Honda in the other year.

Analysts such as Clarence Ditlow, head of the Washington-based Center for Automotive Safety, say Toyota appears to have become far more aggressive about handling safety-related issues since it ran into trouble in late 2009 and 2010 over delays in recalls related to so-called unintended acceleration.

The maker earlier this year agreed to pay a $1.2 billion fine to settle an ongoing investigation of those delays by the U.S. Justice Department. Toyota also agreed to three years of probation. It has separately spent billions of dollars to settle various legal claims related to the unintended acceleration problem.