Orlando is America’s Most Dangerous Place for Pedestrians 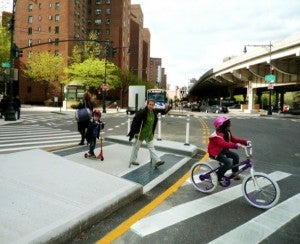 Despite recent efforts to improve safety, pedestrian deaths have risen for the past few years.

Disney World may be the “Happiest Place on Earth,” but walking the mean streets of the “Theme Park Capital of the World” may not be such a pleasant experience.

Walking in Orlando is almost akin to being on a theme park ride, but without the safety equipment or procedures, according the latest edition of the Pedestrian Danger Index (PDI).

“We are allowing an epidemic of pedestrian fatalities, brought on by streets designed for speed and not safety, to take nearly 5,000 lives a year; a number that increased six percent between 2011 and 2012,” said Roger Millar, director of the National Complete Streets Coalition.

“Not only is that number simply too high, but these deaths are easily prevented through policy, design, and practice. State and local transportation leaders need to prioritize the implementation of Complete Streets policies that keep everyone safe.”

The PDI is produced by the National Complete Streets Coalition (NCSC) as part of its annual Dangerous by Design study that highlights cities that are not safe for pedestrians and why.

Orlando’s PDI during that same period is almost five times higher than the national average: 244.3. While many may have ideas that cities like New York or Chicago with millions of people and nearly just as many cars it seems would be near the top of this list, the State of Florida took the top four spots in the survey.

Following Orlando at No. 1 was Tampa, Jacksonville and Miami. The remainder of the top 10 included: Memphis; Birmingham, Alabama; Houston; Atlanta; Phoenix; and Charlotte. Boston was the safest city in the survey, coming in at 18.7.

(No longer in the U.S., Suzuki still facing recalls. For more, Click Here.)

Not surprisingly, Florida finished atop the PDI list with a rating of 168.6. Alabama was second at 125.2. The rest of the top 10 included: Louisiana, South Carolina, Georgia, Delaware, Mississippi, Arizona, North Carolina and Texas.

(Click Here for details about an analyst’s warning about the flood of GM recalls.)

The same four cities topped the 2011 survey and Florida also topped the state edition. Since then, the four cities and the state have implemented changes aimed at improving pedestrian safety and all but Jacksonville saw their PDI drop.

Overall, pedestrians represented 12.3% of total traffic deaths during the time period. After decreasing slightly in the first few years, the fatality numbers have been rising since 2010. A total of 4,280 people walking died in traffic crashes in 2010. That number increased to 4,432 in 2011, and 4,743 in 2012. In 2012, people on foot represented nearly 15% of all traffic fatalities.

The NCSC had a list of suggestions to improve pedestrian safety:

The majority of pedestrian deaths occur on roadways that encourage speeding, and speeding is a factor in nearly one-third of all traffic fatalities, the NCSC noted. The report finds that these deaths can be prevented through changes to the design of the streets: providing sidewalks, installing high-visibility crosswalks and refuge islands and calming traffic speeds.