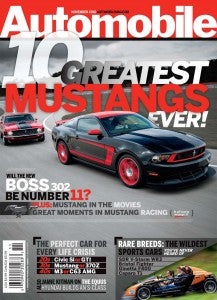 For now, no major editorial changes are planned -- at least none being openly revealed.

The publishing crunch has caught up with another major automotive magazine, the parent of Michigan-based Automobile ousting its long-time editor-in-chief and moving its headquarters to California as part of a broader shake-up in its troubled media network.

Along with the hit to Automobile, generally considered one of the weaker of the mainstream monthly U.S. automotive publications, Source Interlink Media will “absorb” 12 of its more specialized publications into the even 10 core brands that will survive. Fittingly, the company plans to rebrand itself as TEN: The Enthusiast Network.

Along with Automobile, the surviving publications include Motor Trend, perhaps the most successful of the automotive publications at expanding its brand beyond its print origins, Hot Rod, Surfer, and TransWorld. Gone will be the likes of Popular Hot Rodding, Mud Life and 5.0 Mustang.

“The Company’s future focus will center on its iconic core brands and their connection with the consumer across all forms of media,” said Scott Dickey, Chief Executive Officer, in a prepared release. “We are now putting in place the foundation to operate as a truly independent content creation and media services company, and the rebranding signals both the scale of the changes and scope of our ambitions.”

Officially, the media conglomerate stressed that Automobile’s editorial policies won’t change, a position a well-placed source within the magazine echoed. But much of its voice has, for many years, been honed by its long-time editor Jean Jennings who helped found the publication with its original editor-in-chief and industry veteran David E. Davis.

(From track to street? Will this DeltaWing 4-seater make it into production? Click Here for more.)

Rumors of a shake-up have been rampant for some time, most predicting Jennings departure, some even predicting Automobile itself might not survive. It seems clear that the newly renamed TEN is hoping to cut costs by moving key elements of the publication to California from the current base in the Detroit suburb of Ann Arbor. Automobile will now share space with the bigger Motor Trend, and the two publications will have common backroom operations.

A “number” of current employees, beyond Jennings, will be terminated, several sources indicating that could come to as much as 90% of the original staff, though more than a few will remain with the magazine, some in new offices in another Detroit suburb. Ironically, that facility was previously the home of Saab’s American operations before the company went bankrupt several years ago.

Among those remaining with Automobile will be Mike Floyd, now becoming the editor-in-chief. Joe DeMatio will remain in Michigan and in his post as deputy editor, with Todd Lassa also remaining in a Michigan editorial position.

Ironically, even as Automobile moves physically closer to Motor Trend, the plan appears to focus on emphasizing the differences between the two publications.

But Motor Trend’s strategy of expanding as a multimedia entity, rather than a primarily print publication, could be a critical step in the rebranding process. In fact, automobilemag.com will not be dropped – and could be given additional resources.

The shake-up at Automobile comes little more than a year after rival Road & Track underwent its own crisis. In that case, virtually the entire staff was ousted. And the California-based publication, under new Hearst ownership, moved East. It is now collocated with the parent company’s other automotive magazine, Car & Driver.