Aiming for the mainstream. 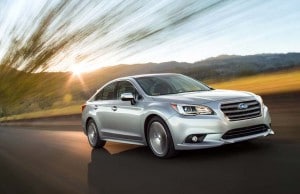 Subaru has long been one of the best-kept secrets in the U.S. automotive market, a brand with a loyal but limited niche following. But with the launch of the all-new, sixth-generation Legacy sedan, the Japanese maker is taking aim at a more mainstream audience, and midsize buyers would be wise to put it on their radar screen.

When the new sedan was unveiled during last month’s New York Auto Show it marked the 25th anniversary of the Legacy nameplate. Like the rest of the Subaru line-up, it has long been popular in Snowbelt cities like Boston and Denver, and has developed an especially strong following among such targeted groups as young, active outdoor fans, nurses and even the gay and lesbian community.

But while the 2015 Subaru Legacy maintains some of the basic features that have long appealed to its loyalists – such as the brand’s Symmetrical All-Wheel-Drive system – the latest-generation sedan adds plenty of other appealing attributes, including what is now one of the industry’s best CVT gearboxes, great fuel economy, and a roomy, well-appointed interior. The new Legacy also gets the latest update of Subaru’s camera-based EyeSight safety system. 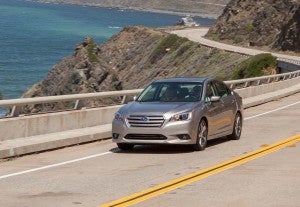 Taking some time to explore the California coast.

If anything, the new Legacy could create some problems for Subaru. While the Japanese maker hopes to nearly double sales over the coming year, it could press up against its limited production capacity if the redesigned midsize sedan proves particularly popular.

But its success has been driven almost entirely by the crossover side of its product line-up. It expects to sell nearly 136,000 Foresters this year and 112,000 Outbacks – but barely 32,000 Legacy sedans, or barely 1% of the huge midsize market.

If all goes according to plan, Subaru could wind up doubling that number with the Gen-6 Legacy. That’d still be a modest number – barely as many of the sedans in a year as Toyota sells Camrys in two months. But, nonetheless, that’s a big jump, and to get a sense of whether Subaru is hitting the mark, we headed out to the Central Coast of California for some weekend driving.

(Subaru sets its sights higher with launch of Legacy. Click Here for the full story.) 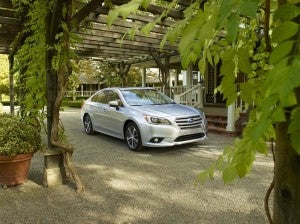 There are two basic versions of the 2015 Subaru Legacy, one equipped with the maker’s 2.5-liter Boxer 4 engine, the other with its 3.6-liter Boxer 6. But there are an assortment of different packages ranging in price from the $21,695 base model all the way up to the $32,585 Limited loaded with everything on the Subaru check list. (Add $795 in destination charges to those MSRP numbers.)

We had a chance to drive both models, including the four-cylinder which makes a reasonable 175 horsepower and 174 pound-feet of torque, as well as the sportier six, rated 256 hp and 247 lb-ft. The smaller engine is reasonably peppy, and can launch from 0 to 60 in about 8.8 seconds. It can also generate decent passing momentum, something you appreciate driving down CA1, the winding two land that runs along the Big Sur coast and offers only the most occasional opportunities to get around dawdling tourists.

But you really notice the difference when you punch the throttle in the six, which will get you to 60 in 6.9 seconds, and makes it easy to pass a line of sightseers before you’re out of the passing zone. 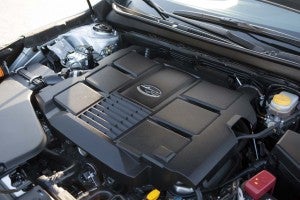 The 2015 Legacy will be offered with a pair of Boxer engines, a high-mileage four and a sportier six.

(Click Here for a first look at the new Subaru Outback.)

Give a chunk of the credit to the newly updated Subaru CVT transmission. That’s not something you’ll read in many of our reviews. Continuously Variable Transmissions may have their advantages when it comes to fuel economy but there’s traditionally a trade-off when it comes to the driving experience, a sensation often called “motor boating,” as the engine revs up while the car struggles to catch up.

With the Legacy, the CVT has been tuned to respond more like a conventional, step-gear transmission under aggressive driving. Indeed, we found ourselves frequently using the sedan’s paddle-shifters to emulate gears one through five as we passed slowpokes and maneuvered through CA1’s sharp corners.

What doubly impressed us was the fact that the 2015 Subaru Legacy nonetheless delivered solid fuel economy, with an EPA rating of 26 mpg City, 36 Highway and 40 Combined with the four, 20/29/23 with the six. By comparison, the four-cylinder Camry gets 25/35/28, the Honda Accord 26/34/29, the Nissan Altima 27/38/31, and the Ford Fusion 23/36/28. Oh, and did we mention the competitive numbers are for front-drive models. The Subaru is up there at the top of the class even with an all-wheel-drive package that comes standard on all models. 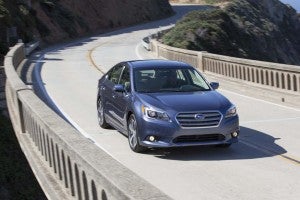 The new sedan's styling is sleeker than the outgoing Legacy, if a bit generic for the segment.

Credit a few other factors, including improved aerodynamics. The overall design is sleeker, there is much more extensive underbody cladding and Subaru has adopted new active grille shutters which shut off the drag-inducing grille when the engine doesn’t need the extra cooling.

Returning to the subject of design, the 2015 Subaru Legacy boasts a much more distinctive and appealing look than the outgoing sedan, with a trapezoid grille a bit reminiscent of Fusion’s, and a more coupe-like roofline. It’s not the styling standout of the Ford sedan but is nevertheless a more handsome car, and one that suggests a higher price tag.

The 2015 Legacy has grown 1.6 inches in overall length, all of that going into the spacious passenger compartment. In fact, though the platform is just a modest 0.7 inches wider, Subaru engineers managed to carve out an extra 2 inches of interior space. Overall, you’ll get 104.6 cubic feet of roomy cabin, with a 15 cf trunk and 60/40 split-fold down back seats.

Subaru products have traditionally had, to be blunt, a bit of a cheap, plasticky feeling to them. So, slipping behind the wheel delivered some pleasant surprises. Even the base car has a much more refined, well-appointed look, with soft-touch materials everywhere your fingers and elbows are likely to come into contact with. “Our fake wood forest is better than their fake wood forest,” joshed Subaru PR chief Dominick Infante. 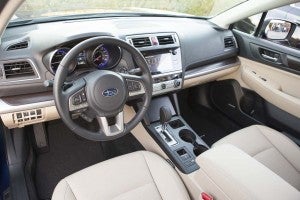 The roomy cabin has taken a marked step up from the classic, plasticky Legacy interior.

As with the 2015 Legacy’s exterior, the cabin design is handsome if not entirely well integrated visually. The elements are all there but the package doesn’t quite have a point of view, as it were. One thing we were quite pleased with, however, was the way Subaru engineers have quieted the cabin down.

Upscale models add a few nice touches, including a handsome set of leather seats, and well finished aluminum-like trim. Even the base car gets a new 6.2-inch touchscreen display to handle its various vehicle and Infotainment functions. Stepping up gets you a 7-inch screen which can be operated much like a tablet, with swipe, pinch and scroll gestures. There’s also a new navigation package.

Overall, we were pleased with the functionality of the upgraded infotainment system, especially as it still offers the ability to operate key audio and climate control settings with knobs. And for audiophiles, there’s the Harman Kardon Green Edge system. It uses a number of tricks to reduce energy demands so while it will sound like you’re pumping 576 watts into its 12 speakers, you’re actually using only about half as much.

(Subaru goes back to the future with all-new WRX STI. Click Here for the full story.)

For 2015, you can order both the 2.5- and 3.6-liter versions of the Legacy with Subaru’s award-winning EyeSight system. With its optional price of $1,195, EyeSight uses a pair of stereo cameras – made smaller and more functional in the new sedan – to integrate a wide range of safety features, such as Lane Departure Warning, and Forward Collision Warning with full brake intervention. 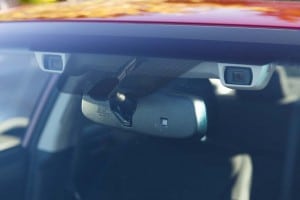 Subaru has added several other useful features for the new model-year, including Blind Spot Assist and Cross-Traffic Alert. A rearview camera is now standard on all Legacy models. There are now eight airbags including a novel system that places a bag in the forward part of the seat, under your legs. It’s designed to prevent “submarining,” the tendency of a passenger to slide out from under a seatbelt in a forward crash.

Those seats are supportive and comfortable, even after several hours maneuvering down the California Coast, pushing the limits on every corner where we weren’t stuck behind a rental car or RV.

The 2015 Subaru Legacy features Active Torque Vectoring, a system designed to direct more power to the outer wheels to help turn you through corners. But the reality is that the sixth-generation sedan isn’t quite as aggressive as earlier versions were, perhaps a trade-off to appeal to a more mainstream audience.

Oh, the rack-mounted electric power steering, or EPS, system is responsive and provides a reasonably good amount of road feedback, but the latest Legacy is not quite as sporty, overall, as prior generations. That said, it’s still one of the best-handling of the midsize sedans on the market, readily topping the Toyota Camry and generally up with the best in the segment, the Honda Accord and the Mazda6.  It’s also got the ventilated disc brakes you want to have when you’re spending a day on a demanding highway. 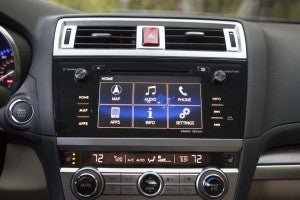 The bottom line is that the new 2015 Subaru Legacy delivers on just about every possible count. It’s roomy, comfortable, quiet.  It can be loaded with just about any feature you’d expect in a mainstream midsize sedan, whether leather seats, advanced safety gear or an easy-to-use infotainment system. It’s peppy and it delivers surprisingly good fuel economy. Now, add traditional Subaru attributes, including its AWD system and we will have a hard time understanding if even more buyers don’t put the new Legacy on their shopping lists this coming year.