Former CEO says board didn’t throw her under the bus. 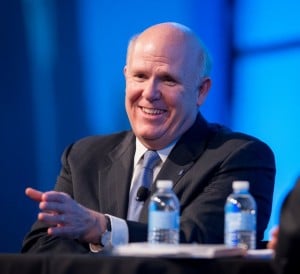 Former General Motors CEO Dan Akerson came to the defense of his successor, Mary Barra, saying he doesn’t believe she knew about the ignition switch problem that kicked off the recall of more 2.6 million small cars.

He also said the company’s board of directors didn’t put Barra in an impossible position by knowingly saddling her with a crisis.

“Mary has said it: The moment she became aware of the problem, as I would expect, she confronted it,” Akerson said in an interview with Forbes magazine. “She didn’t know about it. I bet my life on it.”

The story appeared today as part of a piece on Barra, who was ranked No. 7 on Forbes’ annual list of the World’s 100 Most Powerful Women. Barra is the cover story.

Barra was named CEO, taking over for Akerson, on Jan. 15. She’s said repeatedly, including in testimony before two congressional hearings in April, the first time she’d heard about the problem was in January and she ordered the first wave of recalls on Jan. 31.

The problem stems from a defective ignition switch that resulted in more than 30 accidents and at least 13 deaths. According to multiple reports, many executives interviewed as part of the ongoing investigation of the problem have supported the assertion that no senior executives, including Barra, were made aware of the problem.

GM is conducting an internal investigation – as are the Justice Department, two congressional committees, the Securities and Exchange Commission and several families – to see what went wrong and how it should be resolved. That report, which is being conducted by a former U.S. attorney, is due next week.

The automaker also hired compensation expert Kenneth Feinberg to help GM examine its options and determine if it will compensate victims related to the ignition switch defect — and if so, how much it will pay them.