Computer controlled, concept would require as little as 5 hours training to fly. 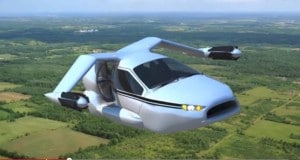 The Terrafugia TF-X would travel 500 miles on a plug-in hybrid power train. However, it's not likely to be ready for another decade.

Flying cars have long been the stuff of science fiction, though plenty of entrepreneurs and visionaries have struggled to make the concept a reality – including no less than the original Henry Ford.

Several projects are now underway and one, started by a group of MIT alumni, is rapidly working its way towards reality. But the former college cronies apparently are dreaming about taking their original Transition flying car a giant leap further into the wild blue yonder with an even more advanced design they’ve dubbed the TF-X.

To start with, the four-seater would be capable of vertical take-offs and landings. And since it would largely be controlled by a central computer network, the TF-X would, claims a Terrafugia promotional video, require a pilot/driver to have as little as five hours of training, a slight fraction of what it now takes to get the most basic private pilot’s license. 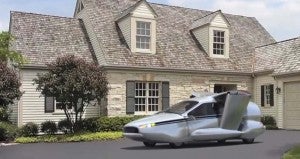 Developers of the Terrafugia TF-X suggest it be thought of a plane that drives. At 19 feet long, it can be parked in a regular garage.

Oh, and if that isn’t appealing enough, the team says their newest flying car design would use an environmentally friendly plug-in hybrid powertrain.

The Massachusetts-based Terrafugia has been drawing plenty of attention to itself thanks to the Transition, a $280,000 flying car that has been slowly working its way through the complex product development and federal regulatory process. Just 19 feet long, it was designed to fit inside a typical suburban garage once its 27-foot wings were folded up, allowing it to drive on any conventional road.

“Don’t think of it as a car that flies,” suggested Carl Dietrich, one of the MIT students now serving as Terrafugia’s CEO. “Think of it as a plane that drives.”

Perhaps, but beyond the ability to fold up those wings, the Terrafugia would operate pretty much like any aircraft, needing a long runway to get airborne. With the TF-X, the company is moving closer to the sort of craft one might envision the sci-fi cartoon family, the Jetsons, would own.

For one thing, Terrafugia claims the four-seater could get airborne from a level clearing of as little as 100 feet, rotating its twin wing-mounted propeller motors to a vertical position. Airborne, they would rotate back to a conventional, forward position – much like the bigger Osprey flown by the U.S. military.

Once in the air, the TF-X is envisioned capable of reaching 200 mph and delivering a full 500 miles of range – plus reserves – enough for a quick jaunt from Washington, D.C. to Boston, or from Los Angeles to San Francisco.

The craft could be flown manually by a licensed pilot, or essentially flown on an advanced autopilot system requiring only minimal training. The computer network it would plug into, Terrafugia claims, would automatically sidestep crowded air lanes, as well as bad weather, and could land the craft even if the pilot were to become incapacitated. Should a more serious problem occur, the TF-X is outfitted with its own parachute.

(Over half of new vehicles now deliver at least 23 mpg. For more, Click Here.)

So, TF-X “should be statistically safer than driving a modern automobile,” the company asserts.

(Click Here for more details about the BMW and Mercedes-Benz recalls of 400,000 vehicles.)

The craft could prove particularly appealing to green-minded flying enthusiasts thanks to its unusual plug-in hybrid powertrain. In total, it will be able to produce 1,500 horsepower, 600 from each of the electric motors driving the propellers, and 300 from the gasoline engine that will serve as a generator when the TF-X’s battery pack runs down.

How soon can you order one? Terrafugia claims the development process will likely take it eight to 12 years.

Considering the time it has taken to get the comparatively simpler Transition airborne, few would be surprised if it takes even longer. Indeed, a century of efforts have yet to make the aerocar a practical reality, though Terrafugia is just one of a number of companies now seemingly close to cracking the code and making a sci-fi dream finally become a reality.