Remembrances on the unlikely launch of the 1964-1/2 Mustang 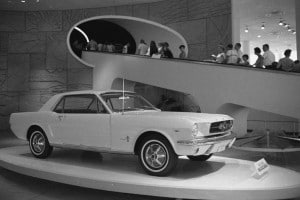 Author Mike Davis provides readers of his new book, Mustang and the Pony Car Revolution, a look at how the Mustang came to be from inside Ford headquarters.

A full 50 years ago this week, a new car burst onto the scene that revolutionized the automotive business. But the original 1964-1/2 Mustang was almost an after-thought, a design that was rushed to market when then-Ford President Lee Iacocca pulled the plug on a far more stodgy small car he decided wouldn’t sell.

Not so the Mustang. The flood of headlines helped Ford sell so many it had to add two extra assembly plants to keep up with demand.

Ford will be staging a series of events this week to mark the Mustang’s Golden Anniversary. That includes a major event at the NY Auto Show where the all-new 2015 Mustang will be on display. The make is even cutting a new model into three pieces to haul it up to the observation deck at the Empire State Building. 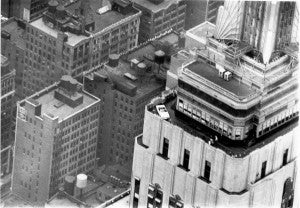 The 1964-1/2 Mustang on display on the Empire State Building Observation Deck.

Mike Davis, a semi-regular columnist for TheDetroitBureau.com served as part of the Ford Motor Co. PR team when the original Mustang debuted a half-century back. He’s just published his 16th book, Mustang and the Pony Car Revolution, which looks back – in both words and pictures – over those 50 years of Mustang. We asked Mike to offer some remembrances and a bit of detail about the new book.

My book is reasonably unique among the numerous other books likely to come out this year celebrating Mustang’s Golden Anniversary since, to the best of my knowledge, it is the only one created by a Ford insider. Well, almost an insider—because in 1964 when the Mustang coupe and convertible were unveiled officially by Lee Iacocca at the New York World’s Fair that Friday, April 13 — I was already working as a PR man for Ford Division’s in-house rival, Lincoln-Mercury Division.

And if you don’t think that such a rivalry was active in Detroit back in those days, you never worked in the auto industry here. Just as in Ford Motor Company, Chevrolet vied for retail buyer, media and corporate attention with Pontiac and Olds within General Motors, as did Plymouth with Dodge within Chrysler Corporation.

But I was a first-hand observer of what I consider the real birth of the Mustang — two years before, in April 1962 when, on loan to Ford Division from Ford’s corporate news department, for several weeks I had been preparing press material for the U.S. launch of a new Ford small car from Germany, code-named Cardinal.

Late one day around mid-month, Ford Division PR chief Walt Murphy came into my borrowed office and stated: “Iacocca’s killing the Cardinal…he thinks it’s a little old ladies’ car, gray on the inside and gray on the outside…and we need something sporty to counter (the sportier Chevrolet) Monza.” So, only six months before its planned North American introduction, the subcompact German car with its V-4 front-wheel-drive power pack was aborted. (However, in Europe it continued on to success as the Taunus 12M.)

Meanwhile a Ford Division team of product planners, marketers and finance people had been meeting for a year or so, trying to figure out what to do next in the intense rivalry with Chevrolet. Now they had their marching orders — which meant they had to not only design but get the new Mustang ready for production in a remarkably short two years.

On this team, it may have been Planner Hal Sperlich who conceived the idea of scavenging key components—inner sheet metal panels and powertrain—from the compact-sized Falcon introduced for the 1960 model year and the “intermediate” 1962 Fairlane, thus reducing tooling costs and speeding the program into production.

Hal never responded to my phone call or email requesting an interview for my book, but some Ford executive retirees credit him with being the “father of the Mustang” – a title that, incidentally, has often been applied to Iacocca. Perhaps that’s appropriate considering the Ford president had the difficult job of squeezing the necessary funds out of the corporate bean counters for a new and totally untried vehicle program just a few years after the disastrous failure of the Edsel.

Well, as the old saying goes—and it perfectly fits Mustang development — “Success has many fathers and failure is an orphan.” Hal Sperlich was a brilliant conceptualist who clearly is also credited with “inventing” the minivan later to save Chrysler Corp. But that’s another story.

As an automotive historian preparing a photographic history of Mustang, I visualized readily that the idea of an inexpensive sporty car could be traced back to the Model T Ford runabout, followed by rumble-seat roadsters of the 1930s, with the long hood-short deck styling owing its execution to pre-war Lincoln Continentals.

(Click Here to check out the partnership between Land Rover and Virgin Galactic.)

And then post-World War II cars brought the American market such icons as MG roadsters with bucket seats and floor-mounted shifts and low-cost, reliable, fun-to-drive VW Beetles. Finally, a key factor influencing Mustang design was the success of the 1958 Ford Thunderbird that proved there was more market for a four-place car than a two-place bucket-seated one.

Mustang’s introductory advertisements in April 1964 emphasized the price: $2,368 (about $18,000 in today’s money) while forthrightly explaining the amount did not include “destination charges from Detroit, options, and state and local taxes and fees, if any.” Beyond the base car (“stripped”), the list of options could create either a performance car or a model with such then “luxurious” features as air conditioning and power windows, brakes and steering.

Mustang was an instant success, and by January 1965, production had been expanded from the original Dearborn, Michigan plant to other Ford assembly plants in Metuchen, NJ, and San Jose, California.

The unlikely pony car is today one of the few vehicles on the American market to boast a continuous run of 50 years – with little standing in its way to continue on for another half-century.

Mustang and the Pony Car Revolution can be ordered directly from www. arcadiapublishing.com, Amazon.com, or by calling 1-818-313-2665. The retail price in stores is $21.99. Photos reprinted with permission of Mike Davis and Arcadia Publishing.