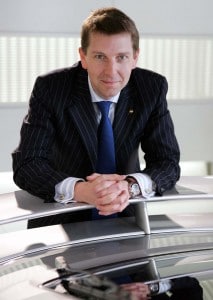 It’s been an up-and-down month for Tesla, and if at times it seems like the start-up battery-carmaker has struggled a bit to stay on-message that’s probably no surprise.  It has, in fact, struggled to keep staffed with PR professionals and even those now on the Palo Alto-based team have often been overwhelmed.

There’s the generally good news about the maker’s stock price run-up, the worrisome developments involving a series of vehicle battery fires.  This week, Tesla seemed shell-shocked when it was denied the opportunity to set up factory-run dealerships in New Jersey. Never mind the fact that its expanding in Europe, preparing to enter China and getting ready to launch a new SUV, to be followed by a more mainstream battery sedan.

Making sense out of all that will shortly become the responsibility of one Simon Sproule, at 45 an industry veteran who has worked for Ford, Jaguar, and for most of the last decade with CEO Carlos Ghosn in a variety of duties at Nissan and the Renault-Nissan Alliance.  His most recent assignment was director of communications for that Euro-Pacific partnership.

Sproule confirmed to TheDetroitBureau.com that he will be joining California-based Tesla Motors next month as its new vice president of communications.  It’s an intriguing jump with an especially significant synergy since Nissan and Tesla are each vying for title as the world’s biggest producer of battery-electric vehicles – though at as much as $110,000 apiece, the Tesla Model S is a significantly more expensive and lavishly equipped offering than the little Nissan Leaf.

While Sproule declined to discuss his plans for Tesla having not officially started in his new post, a series of industry insiders suggest he’ll have a lot of work ahead of him.  Not only is Tesla in an aggressive growth mode – add plans for its new “Gigafactory” battery plant to the list of developments, never mind its growing Supercharger network – but it really hasn’t followed a traditional PR path.  Make that a traditional automotive PR path.

Much of its message has been aimed at non-automotive media, often to the frustration of traditional car scribes among whom many have yet to been given the opportunity to even sit in, never mind drive, one of the Model S sedans.  The approach can be an effective one when things are going right, said one PR veteran, “but it can go very seriously wrong, as well.  The general media like to build you up then knock you down.”  Asking not to be identified by name, the executive added that traditional automotive media have a better understanding of the business that shows in their coverage.

Then there’s Elon Musk. The Internet billionaire, founder of Tesla – and of the SpaceX rocket company and SolarCity solar energy company – isn’t your typical business executive.  He’s seldom shy when it comes to expressing his opinions, whether in an interview, a conference call with investors or his public blog. Musk has an innate ability to speak to the public but it can also prove a risky move as many a PR person handling such public personas as Donald Trump or Lee Iacocca can explain.

For his part, the British-born Sproule has a natural cool mixed with a bit of hipness that should help balance Musk’s brashness without trying to button the CEO down.

Beyond his experience with Nissan’s battery-car program, Sproule has had additional – albeit brief – experience in the high-tech world, a short tenure as head of the PR operations at Microsoft several years back before returning to Nissan in Tokyo.

He is expected to settle into the bay area with his wife and young daughter but as he did while working for the globe-trotting Renault-Nissan CEO Ghosn, don’t be surprised to see Sproule spend a significant amount of time passing through SFO, the international airport in San Francisco.