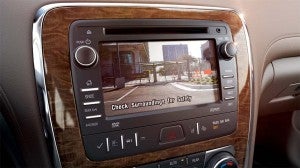 A proposed rule requiring backup cameras on all vehicles is likely to be approved on the heels of a new study showing their effectiveness.

A new study adds strong support to a proposed rule that would require backup cameras on new cars and trucks. It shows the cameras are far more effective at spotting children and other obstacles than less sophisticated parking sensors – or drivers using their mirrors.

Backup cameras are already found on many of the latest cars, trucks and crossovers, but the National Highway Traffic Safety Administration (NHTSA) has repeatedly delayed announcing formal rules that would make them mandatory – something Congress and President Bush authorized in 2007. That’s despite NHTSA’s own estimate that the devices could save as many as 200 lives a year – including a large number of children under the age of five – inadvertently run over when motorists back up.

“Right now, cameras appear to be the most promising technology for addressing this particularly tragic type of crash, which frequently claims the lives of young children in the driveways of their own homes,” said David Zuby, executive vice president and chief research officer for the Insurance Institute for Highway Safety, which conducted the new study.

The IIHS had volunteers check the effectiveness of cameras in a series of tests conducted in an empty Los Angeles parking lot. They were compared to vehicles without warning systems, and those equipped with electronic sensors that use sonar or radar to spot an obstacle, issuing beeps to warn motorists.

In one test, where researchers didn’t advise the test drivers what to look out for, everyone driving a vehicle without cameras or backup sensors hit a dummy representing a child that had wandered behind their vehicle. Such “accidents” were cut in half when motorists were driving a vehicle equipped with a camera. Parking sensors reduced the collision rate by a much more modest 6%.

As might seem intuitive, drivers had the most problem spotting obstacles – whether a pole or a “child” – while driving some of the biggest vehicles on the road, such as a full-size pickup or a big SUV, according to the IIHS, though the safety group did praise the Ford F-150 for using especially large side mirrors to help drivers get a better view around the vehicle.

But the push for more aerodynamic design – which means such styling features as steeply sloped back windows and high trunk decks – has actually reduced visibility for many passenger cars. The IIHS noted that the Hyundai Sonata actually has a 42% larger “blind zone” when backing up than the Ford F-150.

On the other hand, vehicles with backup cameras reduced the blind zone, on average, by 90%.

According to NHTSA research, the using a camera could make a significant difference. The agency notes that about 292 people are killed each year in backup accidents – including 100 children younger than five – with another 18,000 injuries. NHTSA estimates using cameras could reduce the death toll to between 95 and 112 people annually, while also preventing as many as 8,374 injuries.

That encouraged Congress in 2007 to enact a law calling on federal regulators to set new visibility requirements, a bill signed by then-President George W. Bush. But NHTSA missed the original February 2011 target date and continued to postpone action until this past January when it sent a proposal to the White House for review. It now expects to have the regulations finalized by January 2015, in time to actually begin requiring the technology by available for 2017 model-year vehicles.

The move came months after the Department of Transportation was sued by Dr. Greg Gulbransen and Susan Auriemma – two parents who lost or injured their children in backup accidents – Advocates for Highway and Auto Safety, Kids And Cars Inc., and the non-profit Consumers Union, the publisher of influential Consumer Reports magazine.

Henry Jasny, senior vice president and general counsel for Advocates for Highway and Auto Safety, called NHTSA proposal “a positive sign (of) progress,” but cautioned “the process is far from over.”

(To see why Audi is eager to launch the new A3, Click Here.)

On the whole, automakers have been supportive on using backup cameras in their vehicles – Honda, for example, already has laid out plans to equip all its vehicles sold in the U.S. But there had been earlier concerns about the speed with which the devices would need to be activated, essentially immediately after a driver shifted into reverse, according to NHTSA, which some manufacturers had worried they couldn’t accomplish without more costly systems.

The industry is expected to back the current NHTSA proposal.