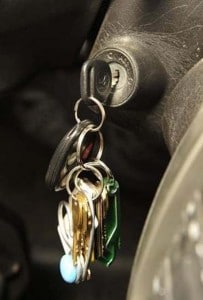 One of the recalled GM ignition switches.

The U.S. Justice Department is turning up the heat on General Motors, launching its own preliminary investigation into how and why the automaker delayed action involving faulty ignition switches catching blame for at least 13 deaths and 31 crashes.

The investigation will probe whether the GM might have violated criminal or civil laws requiring automotive manufacturers to advise federal regulators about potential safety problems in a timely manner.  A timeline supplied by the Detroit maker last month indicates it first became aware of the problem as much as a decade ago.

The problem centers around an ignition switch widely used in a variety of compact GM models between 2003 and 2007.  It appears that when the vehicle is jounced around on a rough road, or if a motorist uses a heavy key ring, the switch can inadvertently turn from the On position to Off or ACC. In such a situation, a vehicle’s engine can stall and its airbags can be deactivated.

But while GM apparently advised its dealers of the issue as early as 2005, and it appears to have bought back more than a dozen cars from owners who complained about the problem, it did not order a recall until last month. On February 13, the maker issued a callback for 778,562 Chevrolet Cobalts and Pontiac G5 models sold during the 2005 to 2007 model-years.

Facing criticism from safety advocates who noted the same switches were used in other products, GM ordered an expanded recall two weeks later to cover models including 2003-2007 Saturn Ions, 2006-2007 Chevrolet HHRs, and 2006-2007 Pontiac Solstice and Saturn Sky models.  In all, a total of 1.6 million vehicles are now impacted, including 1,367,146 sold in the United States.

A call to the Justice Department has not yet been returned but several wire reports indicate the investigation is being led by the U.S. Attorney’s office in the Southern District of New York.

Asked for comment on the investigation, GM spokesman Alan Adler said through an e-mail, “There is no comment from Department of Justice in the wire stories and therefore we do not have one either.”

It is one of several inquiries now underway.  Separate investigations have been launched by House and Senate Committees, the House Energy and Commerce Committee on Monday advising both GM and the National Highway Traffic Safety Administration that it wants documents relating to the switch problem and subsequent recall within two weeks.

The order covers “a detailed timeline of interactions and communications between GM and NHTSA related to stalls, air bags and/or ignition switches in the GM vehicles subject to recall.” And, in a notable exception to the partisan politics dividing Washington, both Republican and Democratic members of the committee have expressed their concerns.

NHTSA is also coming under fire for failing to step in earlier to force a recall for the switch problem but it remains unclear precisely how much information GM had provided the safety agency.

The long delay in responding to the ignition switch problem has perplexed those who had expected such problems to be addressed by the so-called TREAD Act passed in 2000.  Short for the Transportation Recall Enhancement, Accountability and Documentation Act, it was enacted in the wake of problems involving the Ford Explorer and Bridgestone tires that were linked to 270 deaths.

NHTSA, meanwhile, has launched its own investigation of the recall and has demanded answers to a list of 107 questions.

In what could be her first serious test since becoming GM’s first female CEO, Mary Barra has announced she will oversee the maker’s internal investigation of the switch problem and belated recall.  It has hired two major law firms to assist in the process, including Chicago-based Jenner & Block, whose chairman, Anton “Tony” Valukas, is a former U.S. attorney who oversaw the investigation of the 2008 collapse of Lehman Brothers.

It remains to be seen what the Justice Department is looking for and what sort of laws it believes might have been broken. NHTSA, meanwhile, could fine GM as much as $35 million and seek criminal charges if it decides the maker didn’t recall the affected vehicles when it new they were defective. The fine, if levied, would be the highest ever for an automaker.

GM has already settled a number of lawsuits related to the defective switches but, ironically, the company’s 2009 bankruptcy might shield the maker from some of the costs it could otherwise face.  After emerging from Chapter 11, the company left most of its debts and liabilities with the “old” GM.  Lawsuits related to those who were injured or killed prior to July 2009 would have to sue the old entity, rather than the “new” GM, in bankruptcy court.