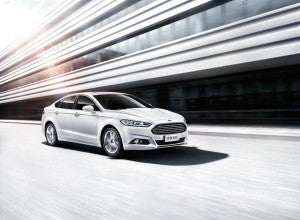 The Ford Mondeo is a strong seller in China and helping lead the maker to rising sales there.

While the Chinese economy may be sluggish, those forces don’t seem to be hurting General Motors and Ford. The two U.S. automakers, which continue to expand their footprints in the country, posted record sales results in February after seeing strong results in January too.

GM reported its joint ventures sold 257,770 vehicles in China during February, setting a new record for the month as sales increased 19.9% from the same month last year. Continued strong demand for the Ford Focus, the best-selling nameplate in China last year, helped Ford China increase sales by 67% in February, with 73,040 vehicles sold.

Both GM and Ford are off to a fast start despite concerns about the Chinese economy, which is facing a variety of challenges and is growing at a slower pace than in the past. China’s economy grew 7.7% last year, according to Bloomberg, and similar growth is expected again this year.

Ford China’s sales are up 59% for the year compared with the first two months of 2013 and after all-time monthly record sales in January. GM’s domestic sales during the first two months of 2014 have increased of 15.2% from the year-ago period and also a new record. Both GM, which was nosed out by Volkswagen AG last year for sales leadership in China, and Ford are also adding new capacity in China to meet increased demand for their vehicles.

Buick sales in the domestic market increased 13% and Cadillac sales increased 91%, but Chevrolet sales in China dropped 0.1% on an annual basis to 46,347 units.

(Click Here for details on the feds demanding answers from GM about ignition recall.)

Total passenger car sales for Ford China—which includes imported cars—rose 88% in February with 56,284 vehicles sold compared to 29,950 in February 2013. Ford passenger cars so far in 2014 have increased 73% when measured against the same period last year.

(To see why pedestrian deaths fell in the U.S. last year, Click Here.)

Ford also recently announced a partnership with mobile telecommunications giant China Mobile to bring two of its most popular apps—Lingxi and Fetion—into Ford vehicles through Ford’s SYNC AppLink technology platform. SYNC AppLink-equipped vehicles will be available in China later this year, initially in the Ford Focus and the new Ford Fiesta, to be followed later by other models.