Improved ride, mileage and safety features keep it on top. 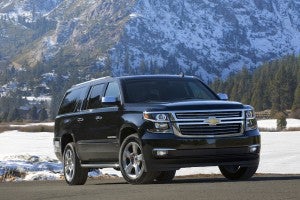 The 2015 Chevrolet Suburban with more contemporary styling, improved fuel economy and a slew of safety and convenience features is likely to remain the dominant vehicle in the segment.

The new 2015 Chevrolet Suburban has a lot of history behind it.

First introduced in 1930s to carry passengers from suburban railway stations – hence the name – to local destinations, the Suburban has been in production for 80 years and the latest iteration represents the 12th generation of what has always been one of GM’s most profitable vehicles.

GM also dominates the market for big, body-on-frame sport utility vehicles and isn’t about to give up that position with the 2015 model. The Suburban and Chevrolet Tahoe, with its shorter wheelbase, account for 50% of the sales in the segment. 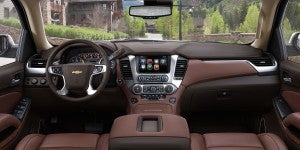 The 2015 Chevrolet Suburban showcases an all-new interior featuring functional technology and creature comforts that are all easy to reach and easy to use.

Despite competition from Ford, Toyota and Nissan, GM’s share of the segment tops 75% after sales of the GMC Yukon and Cadillac Escalade are added to the sales total for the Suburban and Tahoe in a segment that consistently attracts affluent buyers.

However, none of GM’s competitors have been able to hold the loyalty of buyers the way the Suburban has over the years and the new Suburban has only gotten better as it arrives in showrooms with more features as standard equipment, better fuel economy and a more comfortable cabin all the way back to the third row of seats.

The exterior of the 2015 Suburban has the traditional straight-forward and functional design that helps define a big SUV. But GM designers have also made the new Suburban more aerodynamic, which improves fuel economy.

The distinctive character of the new Suburban is highlighted by the front grille, which has a more contemporary look and extends all the way back to rear lift gate, which has been given a cleaner look that shouldn’t upset Chevrolet’s traditional customers. This updated look will definitely appeal to potential buyers looking for a roomy, versatile vehicle capable of handling a variety of chores. 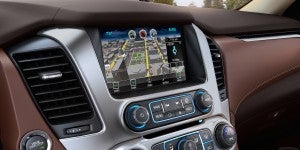 The 2015 Chevrolet Suburban features a range of technologies including Navigation and MyLink.

The Suburban also has more than enough power and is very comfortable on a longer drives. Some of the latest driver assistance features and connectivity technology for entertainment and navigation as well the Bluetooth connections for mobile phones are also available on the vehicle.

Besides enhanced capability and refinement, the 2015 Suburban comes with a new generation of fold-flat rear seats that are definitely easier to use. Folding the seats flat turns the Suburban into the equivalent of a small moving van when needed. 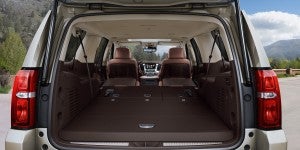 But despite its size, the Suburban drives and handles like a smaller vehicle. It is surprisingly nimble and the electric power steering system and new suspension combine to help improve the overall driving dynamics. In addition, four-wheel disc brakes are standard. Once the Suburban is rolling, you feel as if you are driving a large, modern luxury sedan rather than a body-on-frame SUV.

The interior of the Suburban has also evolved in 2015 model and it is very quiet, which I think helps relieve some of the stress that goes along with long commutes. The instrument cluster is big, bold and easy to read, while the center stack controls are within easy reach despite the vehicle’s extra width. The center console, like in GM full-size pickups, is large enough to hold a laptop or purse and the driver’s or passenger’s lunch. 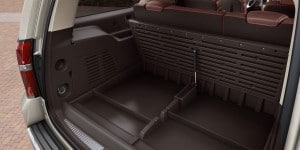 The 2015 Chevrolet Suburban features creative storage solutions that will make hauling all of the items families need easier.

GM also has incorporated new technology into the full-size SUV family to help protect the driver and passengers before, during and after a collision, including a forward-looking radar system and the segment’s only front seat center-mounted air bag. The extra air bag also provides protection to drivers and front passengers in side impact crashes.

The safety features available on the Suburban include parking assistance, lane departure warning, cross traffic alert for backing up and an adaptive cruise control system. The Suburban’s frame, which is shared with the Escalade and Yukon Denali, also has been engineered to give the occupants additional protection in a collision.

Full-size sport utility vehicles have come in for plenty of criticism in the past from critics who don’t necessarily believe bigger is better. During GM’s bankruptcy a few years back, a fair number of observers thought GM might even consider abandoning a segment that seemed to be dying on the vine.

But some key numbers tell a different story. Prices for 2015 Suburban start at $48,590, which includes the destination charge, but the price tag rises to $65,695 for the fully equipped version.

For GM, big is beautiful.