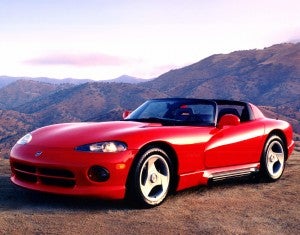 Chrysler Group denies that any of the 93 Dodge Vipers it donated to schools across the country have been involved in any accidents. They are simply no longer useful educational tools and aren't historically significant so they should be crushed.

The actions of a few rogues are coming back to haunt hundreds of unsuspecting innocents across the country, at least, that’s what students involved in an auto shop program thought when they received orders from Chrysler Group to destroy the 1992 Dodge Viper used by the program for educational purposes.

South Puget Sound Community College was ordered to crush the Viper that was donated to the program a decade ago within two weeks. According to reports, a Chrysler official said that a couple of the 93 Vipers donated across the country had been involved in accidents while driven by students, costing the company millions.

The cars are still technically the property of Chrysler, thus the automaker was on the hook for any issues and now they considered the cars a liability and want them destroyed.

However, after this story took off, Chrysler jumped in to provide some perspective…and truth: none of the cars were involved in any type of accidents. They just don’t have any educational value in the eyes of Chrysler anymore.

“With advancements in automotive technology over the past decade, it is unlikely that these vehicles offer any educational value to students,” the company said in a statement. “Chrysler Group fully understands and appreciates the historical significance of the Viper and is very active in preserving many of its legendary models and designs for historic purposes however, none of these vehicles fit into this category.”

Automakers destroying perfectly good cars isn’t without precedent. General Motors collected all of its existing EV1s from the folks who leased them and promptly destroyed them, save a few, which were rendered inoperable.

In the case of South Puget’s Viper, it’s a pre-production model with a VIN number of four. Yes, as in the fourth one built. It’s so appealing that Jay Leno reportedly tried to buy the car from Chrysler several years ago.

Despite it’s VIN, Chrysler doesn’t see it as historically significant and isn’t willing let the school sell the vehicle, which could fetch in excess of $200,000, according to school officials. While the standard Viper of that era was a 400 hp V-10, this particular model has no emissions controls or speed limited and develops 600 hp.

(Ford bringing back heavy-duty F-Series productions back to U.S. from Mexico. For more, Click Here.)

The current Viper engine is an all-aluminum, 8.4-liter mid-front V-10 engine delivering 640 horsepower and 600 lb.-ft. torque. Still, the explanation for the move still isn’t sitting well with some Viper and Mopar fans.

(Click Here to get details on GM and Ford’s record February sales in China.)

“C’mon folks…would it kill you to spare these cars? Crushing them is a public relations black eye but it would be a PR home run if you decided to let the schools keep them…or auction them off and give the proceeds to the schools,” wrote Scot Rathert in response the Chrysler LLC blog post about the vehicles.

(To see why VW and Jeep are looking at pickup trucks for the U.S. market again, Click Here.)

“Let these cars live out their golden years in some collectors climate controlled garage where they only come out for car shows to delight spectators. Crushing muscle cars of any era leaves a very sour taste in the mouths of car lovers…especially Mopar addicts.”