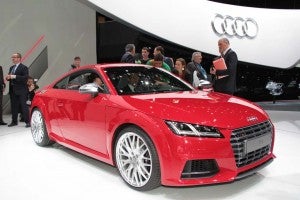 Two months does not a year make, but in a significant breakthrough Audi AG is claiming to hold the lead in the hotly contested global luxury car maket.

The largest of the luxury brands of Volkswagen AG, Audi has been gaining ground on traditional rivals BMW and Mercedes-Benz in recent years, and is hoping to solidify its first-place position with a flood of new products planned for the coming year, an assortment of which were previewed at the Geneva Motor Show last week.

For the first two months of 2014, Audi delivered 242,000 vehicles, giving it a modest 383-unit lead over BMW.  It fell 429 cars short of its Bavarian rival during the same period last year.

And Audi intends to widen the lead, Chief Executive Officer Rupert Stadler said Tuesday at the brand’s headquarters in Ingolstadt, Germany, promising that, “We will increase deliveries in all regions of the world, including Europe.” 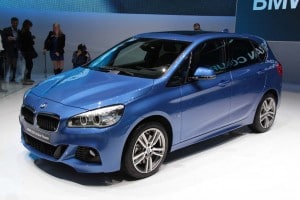 The all-new BMW 2-Series Active Tourer also made its debut at the Geneva Motor Show.

Quite the contrary.  BMW issued its own statement on Tuesday noting that its sales for February set an all-time record of 133,631, an increase of 5.6%.  That figure included brands Mini and Rolls-Royce, however.  The BMW marque alone sold 124,839 vehicles, an 8.6% jump, while its total sales for the year are up 8.9%. BMW has forecast its group sales, including Rolls and Mini, will top 2 million this year, an all-time record.

And third-ranked Mercedes-Benz is closing the gap, as well.  It reported a 17% increase for January and February, demand surging on sales of the new CLA coupe as well as the brand’s redesigned flagship, the S-Class.

Indeed, product is proving the key to the growth of the luxury car market.

“The innovative new models coming out this year, such as the 2-Series Active Tourer and 4-Series Gran Coupe, will give us the momentum to keep growing in 2014,” Ian Robertson, BMW’s sales chief, said in a statement.

(BMW plans to bring the new 2-Series Active Tourer to the US – eventually. Click Herefor more.)

Both of those vehicles were introduced during the Geneva Motor Show’s media preview last week. So was the new S-Class Coupe from Mercedes, while the maker also displayed its new compact GLA crossover and C-Class sedan.  Mercedes is promising to introduce 12 entirely new product lines before the end of the decade, while updating virtually all of its existing models.

But Audi is in the midst of what is generally considered the most aggressive product roll-outs in the luxury market, with 17 all-new or updated models scheduled to reach market this year alone.  That includes the next version of its TT sports car that anchored the Audi display in Geneva.

(Click Here for more on the new Audi TT.)

Audi intends to invest 22 billion Euros, or $30.4 billion, over the next five years in its bid for luxury sales leadership.

The BMW brand is generally expected to regain the lead this year, IHS Automotive forecasting it will sell 1.77 million vehicles compared to 1.66 million for Audi and 1.56 million for Mercedes – which lost the luxury sales leadership in 2005.

Several markets could prove critical to the outcome of the luxury sales sweepstakes.  There’s Europe which has been suffering from its worst economic downturn in decades.  In China, which is likely to become the world’s biggest luxury car market by decade’s end, Audi holds a solid lead – though its rivals are gaining ground.  And in the U.S., Mercedes recaptured the sales lead last year in a tight race with BMW. Audi is a distant third but has laid out plans to catch up in the years ahead – something that could solidify its global position.