Apple Ready to Plug into Your Car

Maker has high-profile presence in Geneva. 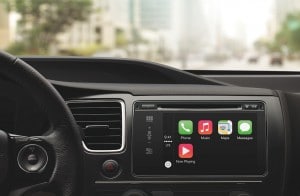 Apple is gaining ground in the automotive marketplace with its CarPlay infotainment system.

While its lost ground to rival Google’s Android smartphone operating system in recent years, you’d hardly have been able to tell during this week’s Geneva Motor Show. Indeed, it seems like the brand name most commonly spoken during the well-attended event was that of Apple, as a wide assortment of manufacturers announced plans to build the high-tech firm’s new CarPlay system into their vehicles.

The list of makers who unveiled Apple-based infotainment systems this week included Ferrari, Volvo and Mercedes-Benz, with Ford, Honda, Toyota and another dozen signed on to use the technology when it appears later this year.

“We’re moving to an era of seamless integration of digital devices and the digital automobile,” proclaimed Dieter Zetsche, Chairman of Daimler AG and brand boss of Mercedes, which showed off the CarPlay system in its new C-Class line. The maker is expected to eventually expand its use to other model lines. 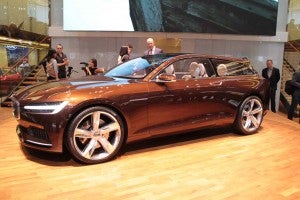 Volvo gave the world a first look at its own new user interface during the Geneva Motor Show. It’s a touch-based system that will appear on the next-generation XC90 crossover set to debut next year – and which was displayed on the maker's Volvo Concept Estate.

In fact, several online reports have suggested Mercedes, Honda and possibly some other manufacturers will offer accessories allowing the CarPlay system to operate in vehicles already on the road.

Basically, CarPlay is a system that mirrors the iOS-based screen you see on today’s iPhones, tweaked, of course, to make it safer to use while driving, whether using a knob, button, touchscreen or voice controls.

“If it controls your screen, it controls CarPlay,” Apple said. Officials also stressed that they worked with manufacturers to minimize distractions with the new system.

CarPlay will give motorists access to a wide range of apps and other features, not only cellphoning, navigation and music, but a number of the apps now available for an iPhone – as well as a special version of the voice-controlled Siri feature that allows a user to do things like asking for directions to the nearest coffee shop.

Among the third-party apps that will be available initially are music and news services Spotify, Beats Radio, iHeartRadio and Stitcher.

There is a downside to the launch of CarPlay – the fact that more than half of U.S. smartphone owners now use devices that operate on either the Android or Windows OS systems. For Apple, on the other hand, the in-car system’s near-ubiquity could help boost sales of the iPhone and other Apple devices.

Ironically, Apple’s rival, BlackBerry, could come out another winner. The Canadian-based company has had little good news in recent years as its own smartphones have continued losing ground. But BlackBerry’s QNX software, it turns out, is gaining ground. Ford, for example, is replacing Microsoft with QNX for its Sync system – even when Sync begins integrating Apple’s CarPlay. In fact, Apple uses QNX software in its new automotive interface, the BlackBerry listing the California firm as one of its key strategic partners.

What’s clear is that more and more motorists want CarPlay or some other smartphone-based infotainment technology. A new survey by the Consumer Electronics Association found that an important consideration for 59% of the U.S. consumers of driving age. And nearly half, a total of 47%, said they wanted to be able to use their smartphone apps while driving.

How to give motorists access to those apps is still evolving. Volvo gave the world a first look at its own new user interface during the Geneva Motor Show. It’s a touch-based system that will appear on the next-generation XC90 crossover set to debut next year – and which was displayed on the maker’s Volvo Concept Estate show car in Geneva.

(Click Here to check out why Ford is bringing heavy duty F-Series production to the U.S.)

“We’ll be able to reduce the number of buttons in the control stack significantly” with the new system, explained Peter Mertens, the maker’s R&D chief, noting that some new vehicles now rely on as many as 60 buttons around the center stock and console. Volvo’s system will be reduced to no more than 10.

(To see why Ford and GM are enjoying record February sales in China, Click Here.)

How that will fly with consumers remains to be seen. Ford, for example, has taken heat for the complexity of its Sync system while rival Cadillac has been pounded for the long waits in operating its own CUE interface.

“We learned the time spent on fulfilling a task is very critical,” said Mikael Gordh, the designer of the Volvo User Interface. A goal of the project was to make sure that whatever a driver needs to do – whether adjusting the seat heaters or listening to a tune off their iPhone, can be done by accessing the fewest number of screens. “The faster you can complete the task, the better,” he stressed.