New Alfa 4 C could soon be followed by other Italian models. 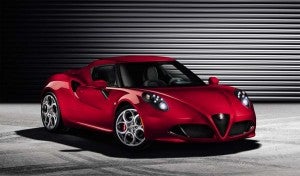 The Alfa Romeo 4C will blaze a return to the U.S. market for the Italian maker.

Picking up on that old punchline, it was beginning to look like Alfa Romeo was going to be the brand of the future – and always would be.  The Italian maker has been talking about a U.S. revival almost since it left the market two decades ago. But despite a few abortive attempts – and an original plan outlined shortly after parent Fiat and Chrysler partnered up in 2009, Alfa’s American comeback has been repeatedly delayed.

Until next month, anyway.  The sporty brand has confirmed it will officially mark its comeback at the upcoming New York Auto Show with the official unveiling of the U.S.-edition Alfa Romeo 4C.  That’s only part of the good news for long-suffering Alfisti.  Sergio Marchionne, the CEO of newly merged Fiat Chrysler Automobiles, recently suggested that the Alfa 4C won’t be alone for long, with other models under consideration for import.

“The recent announcement that Alfa Romeo is returning to the market and has chosen the New York Auto Show to mark the occasion is very special for us and will be well received by our visitors,” said NY Auto Show Chairman John LaSorsa.

Don’t expect a fast ramp-up for Alfa when the first of the 4C sports cars arrives in June.  The initial plan is to offer the exotic, mid-engined coupe, with its carbon-fiber body, in only a select handful of dealers handling another up-market FCA brand, Maserati. 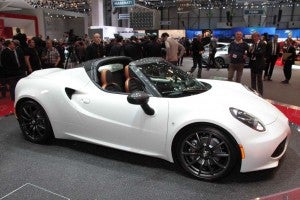 The ragtop version of the Alfa Romeo 4C, dubbed the Spider, debuted at the Geneva Motor Show.

But longer-term, “We’re also going to allow the best-performing Fiat dealers to participate,” Marchionne hinted during an appearance earlier this year.

Once popular for products like the old Spider convertible seen in the classic film, “The Graduate,” Alfa’s fortunes faded over the years and by the early 1990s, it became one of a number of European brands – a list also including Peugeot and Renault – to pull out of the States.

But Fiat, which acquired Alfa in 1986, has long coveted the opportunities presented by the American market, still the world’s biggest outlet for luxury and sports cars.  Ironically, it attempted a comeback earlier as part of a brief tie-up with Chrysler, but also explored opportunities with General Motors.  A U.S. version of the bigger and more expensive Alfa Romeo 8C was briefly sold in the country in 2008.

(Maserati reveals its future with the Alfieri Concept. Click Here for a closer look.)

A year later, after Fiat helped nurse Chrysler out of bankruptcy, Marchionne promised that Alfa would be back for good, but the re-launch has been repeatedly delayed, the CEO previously saying he was not satisfied with such critical components as the 4C powertrain.  He now says it is ready.

The sleek little 4C has a distinctly Italian look to it, albeit a very futuristic design that relies on a lightweight platform and carbon-fiber components to hold weight to less than 1,900 pounds.  Powered by a compact, turbocharged inline-four making 240 horsepower in European trim, the 4C is capable of launching from 0 to 60 in barely 4.5 seconds.

Perhaps the biggest uncertainty is whether U.S. motorists will accept its estimated $60,000 price tag.  That may explain the decision to launch first in Maserati showrooms where the Alfa Romeo 4C would be a comparable bargain.

FCA isn’t expecting to turn the 4C into a high-volume model – Stephanie Brinley, of IHS Automotive estimating sales might nudge only as high as 8,400 next year.  But the sports car could anchor a broader line-up going forward.  One likely addition would be the 4C Spider introduced at the Geneva Motor Show earlier this month.  Officially a “design preview,” the ragtop is expected to go into production shortly.

(Click Here to find out more about the plans Fiat Chrysler CEO Sergio Marchionne has for the maker and its many brands.)

The Spider will share the coupe’s 1.75-liter turbocharged inline-four paired with a 6-speed double-clutch gearbox, the same powertrain found in the hardtop, and according to Alfa CEO Harald Wester, top speed will be “in excess of 155 mph.”

Another strong possibility to share showroom space is a more down-market roadster that Alfa is currently developing as part of a joint venture with Japanese maker Mazda – which will sell its version as the next MX-5 Miata.  The two vehicles, Mazda and Alfa promise, will feature distinctly different sheet metal and use unique powertrains.

During a news conference in Geneva, Fiat Chrysler CEO Marchionne promised that the Miata-based model will be the only Alfa that will ever be built outside Italy as long as he oversees the company.