VW Rocks Out with T-Roc Concept

From Back to Rock…as well as rocky trails. 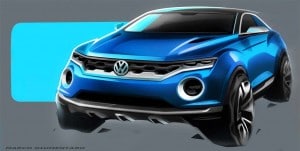 VW claims the T-Roc concept is more than just another car-based soft-roader,

Using a motorist’s own tablet computer, the Volkswagen T-Roc Concept lets you personalize your infotainment choices, whether they run to Bach or Rock. But the name of this new SUV is equally symbolic of its capabilities, with a diesel-powered all-wheel-drive system that’s tough enough to handle rocky trails as well as urban potholes.

Making its debut at the upcoming Geneva Motor Show, the Volkswagen T-Roc concept appears to be more than just another pie-in-the-sky prototype, the German maker suggesting it offers a broad hint of what’s to come as it moves to “significantly extend (its SUV) range with new models in a wide variety of classes.”

VW has rapidly expanded its line-up in recent years, with a broad range of sedans, coupes, cabriolets and sports cars. What it’s been missing out on, however, has been the boom in demand for crossovers.  There’s a big gap between its current Tiguan and Touareg models – something it seems determined to correct. A new model, based on the CrossBlue concept, is expected to be produced in North America. But still other additions are in the works, and T-Roc offers some guidance as to what we can expect. 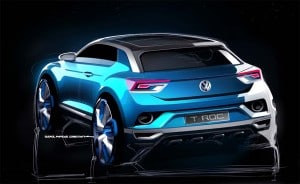 T-Roc shares its MQB platform with the new VW Golf.

The look of the new T-Roc concept might trigger a sense of déjà vu, the front-end design, in particular, sharing some common details with the likes of the new VW Golf, as well as the next-generation Scirocco. The “T” in T-Roc might signify the removable T-top roof, but in this case, there are actually two separate, removable halves that can be stowed in the trunk.

(VW shows there can be a “green” side to sporty cars with Golf GTE. Click Hereto check it out.)

There’s a subtle retro touch, meanwhile, the headlamps reminiscent of the classic Karmann Ghia Type 34.  But these aren’t ordinary headlamps, notes a VW release, which explains, “Each of the two round headlights has a strip of three LEDs at its center, with these LEDs forming the fog light. Above this light strip is a power LED which assumes the function of a swiveling spotlight. Beneath the strip of three LEDs, Volkswagen has integrated a movable camera. Whenever the driver activates Offroad mode, the spotlights and cameras can be activated.”

It appears VW is taking a more Jeep-like approach with this show car.  The T-Roc features a modern, crossover-like body but boasts more traditional, SUV-like capabilities, the maker claiming it can handle some serious trails, not just the snow or gravel most modern CUVs are limited to.

The concept is powered by a 2.0-liter turbodiesel making 181 horsepower and 280 pound-feet of torque.  That’s channeled through a 7-speed dual-clutch gearbox to a 4Motion permanent AWD system.  And T-Roc can be shifted into three different driving modes: “Street”, “Offroad” and “Snow.” 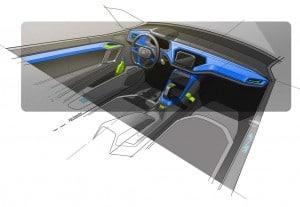 The T-Roc uses a motorist's tablet computer for various functions, including infotainment duties.

On-road, VW suggests the T-Roc would yield about 48 miles per gallon in the European fuel economy metrics.

(Click Here for a first look at the next-generation VW Scirocco.)

Where the CrossBlue would fill the gap between Tiguan and Touareg, T-Roc slots “one down” from the smaller ute, indicating it shares the same compact MQB platform first seen with the new VW Golf – but which the maker plans to use on the vast majority of products sold by the Volkswagen, Seat, Skoda and even some Audi models.

There’s some intriguing, high-tech features to the concept, some of which just might make it into a production car.  The infotainment system is based around a motorist’s tablet computer, with a dock mounted in the center stack.  That means an owner would seamlessly be able to integrate their tunes whether behind the wheel or relaxing at home.

The tablet computer, incidentally, displays the images from the front cameras, as well as an additional camera in the rear – which also gets a boost from rear-facing LED fog lamps.

Appropriately, the instruments and gauges built into the show car all are digital in design.

Can we expect to see a small, Golf-based SUV anytime soon? The answer is, “likely.”  How much it will share in common with the T-Roc concept remains to be seen but we hope to hear more in Geneva next week.

(UAW recalibrating after defeat at VW plant in Chattanooga. Click Here for the latest.)