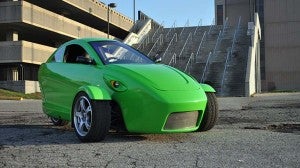 The quirky little 3-wheeled Elio, a low-cost, high-mileage vehicle named for its founder, has moved a step closer to production.

The start-up maker has contracted with Italy’s Comau to pull together the manufacturing operations at an old GM plant in Shreveport, Louisiana.  Though running a bit behind its original schedule, Elio Motors promises to have the new model in production by the fourth quarter of this year, with dealers set to start delivering the first vehicles by the beginning of 2015.

“Comau technology is used by car manufacturers all over the world and Elio Motors is fortunate to have their expertise and experience as part of our team,” said Paul Elio, Founder and CEO of Elio Motors.

Elio describes the new car as “the next big thing in transportation.” It features two wheels up front and one in the back, and despite a promised starting price of just $6,800, it will offer three airbags, with the company aiming to earn a five-star federal crash rating.

But the big selling point could be the promise of fuel economy of as much as 84 miles per gallon using a 1.0-liter, 3-cylinder, 70-horsepower gasoline engine. City mileage is expected to come in at 49 mpg once the Elio is formally rated by the EPA. The car is expected to launch from 0 to 60 in about 10 seconds.

Such bold promises may be generating enthusiasm among green-minded motorists – and in Shreveport, which was hammered by the closure of the old GM plant and could use the promised 1,500 new jobs — but there are plenty of skeptics elsewhere.  A number of entrepreneurs and environmental enthusiasts have been looking for ways to challenge the established automotive order but have so far failed to make much of a dent.

A California-based start-up, Next Auto, had also hoped to acquire the Shreveport plant but abandoned the bid when it failed to win a much-needed federal loan guarantee.

(Nearly 9 in 10 Americans say they’d be “worried” riding in a driverless car. Click Here for the rest of the study’s results.)

A number of other ventures based around high-efficiency gas and battery propulsion systems have also failed, including Think, Bright Automotive, and Fisker Automotive – the latter now in the midst of athe sale of its assets in bankruptcy court.

But Elio has said he is confident his venture can succeed by targeting not only green-minded motorists but also those who might otherwise be stuck with older, less reliable used vehicles, those “having to say a hail Mary before turning the key each day hoping to get to work or school.”

Elio began taking $100 deposits for the 3-wheeler in December and claims to already have 1,000 orders on its books.