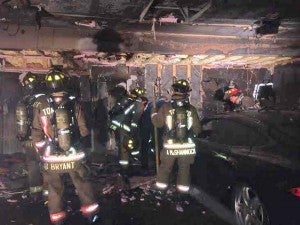 The latest battery blaze occurred in Toronto after the owner returned from a drive and parked the electric sedan in their garage.  Moments later, the owner’s fire detector reportedly went off and the fire department was called to the scene.

The incident is the fourth reported fire involving a Model S in recent months, including two in the U.S. and another in Mexico.  The earlier incidents raised questions about the safety of the Model S design and initially triggered a sharp decline in Tesla’s soaring stock price.  Shares had been recovering in recent weeks but took a tumble again on Friday.

“In this particular case, we don’t yet know the precise cause, but have definitively determined that it did not originate in the battery, the charging system, the adapter or the electrical receptacle, as these components were untouched by the fire,” said Tesla in a statement that insisted, “The Model S continues to have the best safety track record of any vehicle in the world.”

Tesla has sent seven of its own investigators to Toronto to study the latest fire.

It’s not clear if the National Highway Traffic Safety Administration will be involved in the investigation as it occurred on Canadian soil,, though it is expected to be in contact with its Canadian equivalent, Transport Canada.

(Pair of Model S sedans complete record dash across the U.S. Click Here for the story.)

The NHTSA already has an ongoing investigation underway stemming from two U.S. fires that occurred last autumn, one near Seattle, the other in Smyrna, Tennessee.  Both occurred after the vehicles each struck road debris that appeared to penetrate the armor cladding designed to protect the underside of the Model S lithium-ion battery pack.

The third fire occurred in Mexico and appeared to have been the result of a high-speed frontal crash involving a Model S.

The earlier fires raised significant safety concerns about Tesla’s design despite ongoing efforts by CEO and founder Elon Musk to portray the Model S as among the safest automobiles ever designed.  The company’s high-flying stock took a series of hits, further enflamed by several reports by key industry analysts questioning the long-term value of the company.

With Tesla expected to report a strong profit for the fourth quarter, however, its shares have regained momentum and earlier this week raced to a new high of $202.72.  The stock slid back on Friday, losing $1.43 to close the week at a still strong $198.20.

It remains to be seen if it will hold off further losses next week, though it will bring out its full 2013 financial results on February 19th.