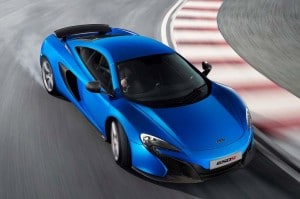 The 641-hp McLaren 650S is faster than the maker's legendary F1 supercar.

While we got our first look at the new McLaren 650S earlier this month there was something critical missing. After all, what’s a supercar without the numbers?  The advance images were certainly handsome enough, but we were left wondering about those little details, like 0 to 60 times and top speeds.

Well, with just days to go before the McLaren 650S makes its official debut at the Geneva Motor Show, we’re getting the blanks filled in and they’re clearly impressive. To start with, the new 2-seater is a full half-second faster from a standing start to 200 kmh – 124 mph – than the current 12C and significantly faster than the legendary McLaren P1.

To quote directly from the British maker’s release, here are some of the basics:  “The latest addition to the McLaren range accelerates to 100km/h (62mph) from rest in just 3.0 seconds, and can reach 200km/h (124mph) in just 8.4 seconds. The standing quarter mile (400m) takes 10.5 seconds, and top speed is 333 km/h (207 mph). This performance puts the latest model from McLaren a full second quicker than the iconic McLaren F1 road car to 200 km/h, and 0.6 sec faster over the standing quarter mile, underlining its performance focus. 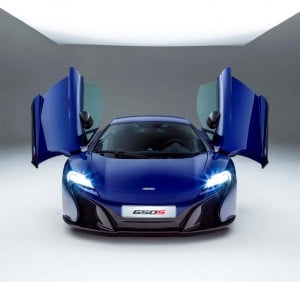 “Driving excitement is at the absolute heart of the McLaren 650S,” proclaims Mike Flewitt, McLaren Automotive’s Chief Executive Officer. “Of course, the performance figures are important, and they help boost excitement. But they’re only part of the story. This is a car that’s about feel as well as measurement.”

One of the more surprising figures McLaren has released is the 24.2 mpg fuel economy figure.  Sadly, the release is targeted to the British market where there are five liters to the Imperial gallon, it turns out. Converting its European cycle fuel consumption rating of 11.7 liters per 100 kilometers yields something close to 20.2 mpg.  That is nonetheless a fair bit better than the figures of some competing supercars barely able to climb out of the low- to mid-teens.

(How does the McLaren 650S compare with the new LaFerrari? Click Here to find out.)

Set to officially debut on Tuesday, March 4th, the 641-horsepower 650S will slot into the McLaren line-up between the current 12C 2-seater and the P1 hypercar, with the newest offering being produced in both Coupe and electrically retractable hardtop Spider body styles, both expected to reach showrooms by spring.

The debut of the new McLaren 650S is in keeping with the British maker’s plan, first revealed by TheDetroitBureau.com in 2010, to roll out an entirely new model roughly once a year.  And, as with both those earlier models, the new 650S will use a carbon fiber chassis – with the lightweight material being used extensively in body, interior and other componentry, as well. 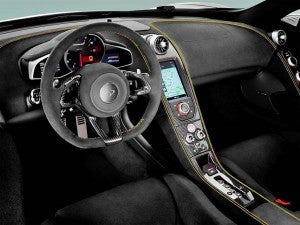 The interior layout of the 650S.

The overall design of the gull-winged 650S will appear familiar to those who’ve already seen either the 12C or P1. The shape of the face, such as the LED headlamps, in particular, are almost a direct lift from the hypercar.  There’s a large but well-integrated front spliter designed to maximize downforce, with door blades behind the front wheels to further channel airflow for high-speed stability and grip.

Large intakes behind what McLaren refers to as “dihedral” doors handle airflow for cooling the midship engine, meanwhile. Like the 12C, the new McLaren 650S also get the Airbrake rear wing, though the maker claims to have enhanced the system to automatically deploy, as needed, either to increase rear downforce or to ensure more rapid braking.  In fact, overall downforce at 150 mph is said to be increased 24% by the aerodynamic detail work.

“As always with McLaren, the new design is there for good engineering reasons,” explains McLaren CEO Flewitt.  “The newly designed front bumper improves downforce and steering turn-in. The high speed handling balance is now even better. The LED lights use less power and last longer.”

(Sound off! McLaren is even looking for ways to replace the windshield wiper with high-tech alternative. Click Herefor the story.)

The new entry will also feature McLaren’s ProActive Chassis Control system, which can be operated in Normal, Sport or Track modes.

“Everything we’ve learnt from the 12C and the McLaren P1™ has gone into the design and development of the McLaren 650S,” Flewitt promises. The numbers appear to back him up.

(Bugatti won’t stray from its course. Replacement for Veyron will use similar hypercar design. Click Here for more.)