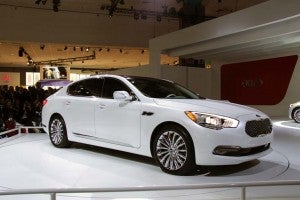 Kia is counting on the K900 to help reshape the maker's image among luxury buyers.

When Kia announced it was bringing the K900 to the to the market it wanted its new luxury flagship sedan to be seen on the same lofty level as a S-Class Mercedes or 7-Series BMW, including the dealership experience.

Well, some of the dealers are having some difficulty making the grade. In fact, according to an Edmunds.com report, only 30% of Kia dealers will be eligible to sell the K900 when it his showrooms in a few weeks.

Dealers wanting to sell the new marque ponied up $30,000 for specialized training and showroom display upgrades. The training is aimed at helping sales staffers relate all of the high-end features available on the new car: features not available on other Kia products. 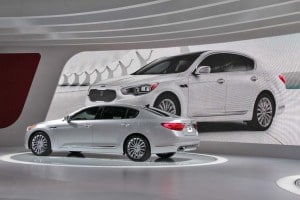 The K900 is part of a long-term strategy to by Kia to change the perception of the automaker.

However, less than a third have paid the fees.

The K900, which was originally sketched out in Kia’s California design center, comes to market with a strong, sleek design and is loaded with the latest technology, such as a Lexicon audio system, 9.2-inch touch screen and a full package of driver-assistance features. The car sits on a rear-wheel-drive platform with a 119-inch wheelbase and comes with a 420-horsepower V8 and an eight-speed transmission.

While the K900 boasts a slew of equipment similar to that of an S-Class Mercedes or 7-Series BMW, it does separate itself in one measure: price. At $65,000, a fully equipped K900 is about $20,000 less than its German rivals.

(Click Here to get a look at the performance numbers for the new McLaren 650S.)

Getting the educated about the K900 is critical as the maker must persuade high-end buyers that the K900 is a worthy option. One of the keys will be to get them to take the car for test drive, Sprague told TheDetroitBureau during the press preview in early February.

(To see how Kia is invading new territory with the K900, Click Here.)

But the luxury segment is growing and the “second-tier” of luxury brands, such as Volvo, Acura, Infiniti, Lincoln and even Cadillac, don’t have that strong a grip on the emotions of potential customers, he said.