How High is Up for Tesla Stock as it Hits Near-Daily Records? 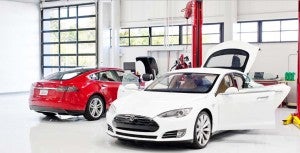 Tesla's stock price closed at an all-time high of $253 per share as the maker rolled out a $1.6 convertible note offering.

A year ago, its stock nudging just over $30 a share and earnings just beginning to move into the black, there were some vociferous debates over the potential value of investing in upstart battery-carmaker Tesla Motors. As Wall Street has clearly demonstrated this past week, the “ayes” have it.

Tesla is counting on those “ayes” to line up and plunk even more money down on the company as it rolled out a $1.6 billion convertible note offering this afternoon. There are actually two sets of notes being rolled out: an $800 million set maturing in 2019 and another $800 million set due in 2021.

“Tesla intends to use the net proceeds from the offering to accelerate the growth of its business in the U.S. and internationally, for the development and production of its ‘Gen III’ mass market vehicle, the development of the Tesla Gigafactory and other general corporate purposes,” the company said in a statement. 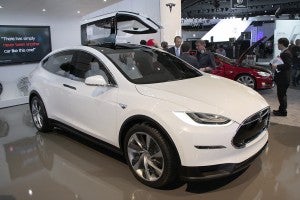 Tesla's Elon Musk told analysts he believes that Model X demand will be greater than that of the Model S.

The notes also carry a provision that could expand the offering of each set to $920 million, pushing the total offering to $1.84 billion. The notes can be converted to cash, Tesla stock or a mix of both.

The offering is not a big surprise as Elon Musk, Tesla’s chief, said in the company’s earnings call last week that he thought it would be a good idea, but declined to elaborate.

The offering is aimed at taking advantage of Tesla’s high profile among investors right now. Those who invested in Tesla, which trades under the symbol TSLA, have been amply rewarded, the maker’s stock jumping more than 700% over the past 12 months and showing no signs of slowing down. Over the past week, in fact, Tesla has set one daily record after another, closing on Tuesday at an even $248.00 and posting gain on Wednesday closing at $253.

Measured another way, the market valuation of the maker, which is still selling less than 2,000 of its Model S electric vehicles a month, is now approaching $31 billion. In February 2013, it was hovering at barely $4 billion.

How high is up? A year later, that’s still a matter of debate. Last autumn, Tesla shares took a rare stumble when several key industry analysts questioned whether it could justify a price of as little as $80 a share. A number of analysts haven’t been much kinder since. On the other side of the exchange, as it were, Morgan Stanley this week issued a report ebulliently suggesting a target of as much as $320 might be within reach.

A search of the web will offer a wide range of opinions. “Tesla should be viewed not as a traditional auto company, but more like an innovative tech company,” Sudip Datta, professor of finance at Detroit’s Wayne State University told USA Today. “While the P/E is in nosebleed territory and it has lost money, the market is reacting to the great reception it is getting in China and its forward guidance.”

There are some potentially good signs for Tesla buoying the optimists, though pessimists might see a half-empty glass. The maker last week reported a stronger than expected profit of $46 million for the fourth quarter of 2013 – though perhaps fittingly, the figure was based on so-called non-GAAP accounting methods. Using the more traditional financial approach, Tesla was $16 million in the red.

The maker did note that sales have been rising faster than expected – albeit still fewer vehicles in a month than Ford sells F-150 pickups in a day. Demand could boom even further based on the preliminary reception the company has received in China, but there reasons to worry Tesla might slip behind schedule on its already delayed second product, the Model X battery SUV. And perhaps the biggest uncertainty is how well it will fare when it reveals a more mainstream electric vehicle, the Model E, in 2015.

For now, says Joe Phillippi, head of AutoTrends Consulting, “the hot money is in this stock.” But the sort of investors who Tesla seems to be attracting are “playing an expectation game,” betting on rumors and “whispers” that things will look better the next quarter.

“These are momentum players,” Phillippi told TheDetroitBureau.com. “God forbid Tesla misses a number or has a problem with a (future product) launch.”

(GMC Denali becomes major brand in its own right. For more, Click Here.)

Another big question surrounds the safety of its battery pack. There were three well-reported fires involving the Model S late last year – which initially caused the stock to plunge. Another fire this month, however, caused only a momentary blip in Tesla’s climb.

But the maker continues to wait for word on an investigation by the National Highway Traffic Safety Administration. Getting the all-clear could add even more momentum to TSLA shares.  On the other hand, were NHTSA to conclude there’s a safety-related defect and order a recall – particularly one involving the basic chemistry of the Tesla batteries, the stock could come unplugged.

(Click Here for a look at Mini’s Clubman Concept.)

Some of the upward motion has been fueled by recent reports that Tesla CEO Elon Musk met last year with the head of Apple’s mergers and acquisitions department. There has long been the expectation that Tesla would eventually want to sell itself or find a suitable partner. Neither company has commented on the meeting and it is far from clear what they had in mind – whether to discuss a series takeover opportunity or simply field the idea of some eventual cooperation.

Considering the huge run-up in Tesla shares since that meeting, Tesla may have grown too expensive a target for even an Apple to consider, several analysts have warned. Then again, the continuing upside potential may be something a potential acquirer wouldn’t want to miss out on.

(To see how Tesla’s new “gigafactory” could slash prices for batteries, Click Here.)

What’s clear is that Tesla isn’t playing by traditional auto industry rules. Its stock is trading at about 1,200 times earnings – and then using the non-GAAP figures. By that measure, General Motors shares would be commanding many thousands of dollars.

That’s flying rarified air where even the most successful high-tech company has had trouble remaining – and the various tech booms of the last two decades serve as a cautionary note of how fast some of the highest flyers have come crashing down.