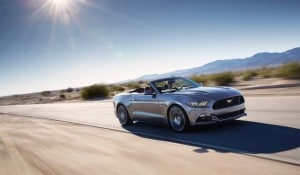 Ford has plenty to celebrate as its popular pony car gets set to celebrate its 50th anniversary in just a couple more months.  But based on a tech backgrounder, buyers will also have reason to applaud when the 2015 Mustang comes to market.

Along with the updated styling, the next-generation muscle car will offer improved aerodynamics, better fuel economy, a stiffer body and platform, a roomier trunk and, Ford revealed, a significantly faster and easier-to-operate convertible top.

Ford isn’t providing precise figures yet on the ragtop but hints it will take about half the time to open or close as before.  It certainly helps to simplify the task of unlocking the top, switching from two latches above either side of the windshield to one center-mounted – though Ford surprisingly still didn’t opt for the latch-less automatic top offered by so many other manufacturers. 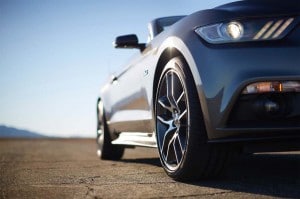 The Mustang ragtop gets a couple other much-needed improvements. Among other things, the maker is adding a fourth bow which smooths out its appearance, eliminating the classic “hungry horse” look, and makes it stronger in climates where it might get buried under a heavy snow – which could happen even in the South if next winter is a repeat of this one.

(Ching-ching. Mustang gets three new pinball machines to celebrate its 50th. Click Here to check them out.)

The addition of a fourth bow has some other, practical advantages.  It allows the top to fold more compactly, stealing less of what is already designed to be a bigger trunk – 19% larger, at 11.4 cubic feet, than the outgoing Mustang. And it improves the new car’s aerodynamics.

Reducing wind resistance was a major goal for Ford. “With the new Mustang, we spent about twice as much time running aerodynamic simulations and doing wind tunnel tests than the previous Mustang,” explained Carl Widmann, aerodynamics engineering manager. “Major advances in our computational fluid dynamics capability let us test the effect of design changes and give feedback to the studio in less than 48 hours so they had more opportunity to try out different styling ideas.”

One of the biggest challenges for aerodynamicists is how to deliver all the air needed to feed and cool an engine while limiting drag. That was an especially serious issue with the new 2.3-liter EcoBoost engine, especially when the turbocharger kicks in.  One of the solutions was to adopt new active grille shutters – already in use on some other Ford products – which close or open depending on factors including engine needs, vehicle speed and interior climate control settings.

(2015 Mustang just one of many new muscle cars coming to market. Click Hereto check them out.)

Another new aero-oriented feature, Mustang gets new aero curtains which guide air around the front wheels, typically one of the “dirtiest” parts of the car in terms of aerodynamic drag.

Reducing wind resistance has become a central aspect in automotive design, especially with tough new federal fuel economy standards set to take effect in 2016 and then, again, in 2025.  But there are other reasons to work with the wind, especially in a vehicle capable of a 155 mph top speed, such as the new Mustang GT.  A poor design can both slow the vehicle down and negatively impact handling – especially at high speeds.

The 2015 Ford Mustang adopts splitters and air dams below the front fascia, as well as a pair of vents on the hood to reduce high-speed lift.

“We worked closely with the vehicle dynamics engineers that are tuning the chassis to make sure our experimental results for lift correspond to what they feel on the car when driving at the track,” said Widmann. “They provided us with some great feedback that we incorporated into our efforts in the tunnel, and the results are definitely noticeable when driving at high speeds.”

Sometimes, even the most subtle details can have a big impact.  Ford moved the side mirrors of its Fusion from the windows to the door, a move that reduced the vortex they normally create.  The maker is doing the same thing with the Mustang – which also has the added advantage of reducing wind noise in the passenger compartment.  That allows a driver to listen to the sounds that matter. And, in a car like the Mustang, that’s the sound of the engine and the newly tuned exhaust note.