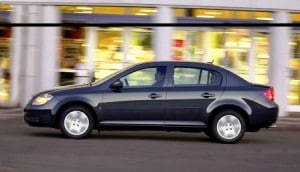 The old Chevrolet Cobalt was one of a variety of GM models covered by the now-expanded recall.

U.S. safety regulators have begun a probe into General Motors’ response to a safety defect that caused 13 deaths, a series of recalls the automaker now admits wasn’t “robust” enough.

The National Highway Traffic Safety Administration has been advised by the maker that it actually knew of the problem for as much as a decade but only this month ordered a recall of nearly 800,000 cars – more than doubling that figure with a second recall announced this week. Should GM be found to have broken federal regulations, the maker could face a fine of up to $35 million. But it is also facing legal action related to crashes caused by the defect.

NHTSA says it wants “to determine whether GM properly followed the legal processes and requirements for reporting recalls.” Federal regulations give a manufacturer only a short window to respond once it learned of a potential safety defect.  The chronology of events the maker provided this week suggests that may not have happened, having first learned of the problem in 2004. The maker learned of the first fatal crash by 2007.

“The chronology shows that the process employed to examine this phenomenon was not as robust as it should have been,” GM North America President Alan Batey acknowledged in an unusually candid statement. “Today’s GM is committed to doing business differently and better.”

(For more on the decision to expand the GM recall this week, Click Here.)

The problem centers around an ignition switch used widely among compact General Motors models – a practice of component sharing increasingly common in the industry, but an approach that can lead to large recalls if a defect occurs.

In this instance, the switch could inadvertently be turned to the “off” or “accessory” position if there’s a heavy key ring or the ring is jarred on rough roads.  If that happens, the engine can shut off and the car’s electrical system can be deactivated, knocking out a vehicle’s power-assisted steering and brakes.  That can lead to a crash and, potentially worse, it would also deactivate the airbag system designed to save passengers in the event of a frontal collision.

(Cars to avoid: Consumer Reports names it pick for worst vehicles on the road. Click Here for more.)

In all, GM says it knows of at least 31 crashes linked to the problem which resulted in 13 known deaths where the frontal bags did not inflate.

GM’s mea culpa “was huge,” Margie Beskau, of Woodville, Wisconsin, told the Associated Press.  Her 15-year-old daughter Amy Rademaker was killed in an October 2006 crash, along with friend Natasha Weigel, 18.

“I feel like we’re getting justice for Amy and Tasha because GM had to step forward and let people know what happened,” said Beskau.

On February 13, GM announced it would recall about 780,000 vehicles sold mostly in North America, focusing on three Chevrolet and Pontiac models.  But it quickly came under fire from those who worried the problem was more widespread.  On Tuesday of this week, the maker more than doubled the recall, adding another 842,000 Chevrolet, Pontiac and Saturn vehicles. A total of around 1.6 million GM compact models are covered by the two service actions, including 1.3 million sold in the U.S.

But the latest recall isn’t the end of the problem for GM as NHTSA begins its investigation and lawyers representing those injured or killed in accidents involving the defect study their options. By its own admission that it didn’t react quickly enough, the maker appears to be opening itself up to significant costs.

The ignition defect was first discovered at a time when GM was facing increasing financial difficulties – which eventually led to its 2009 bankruptcy.  It was also an era when a more compliant NHTSA appeared to have been willing at times to permit automakers to sidestep the costly and embarrassing recall process. A widely-reported internal Toyota memo released in 2010 revealed the maker’s glee at having sidestepped a possible recall related to unintended acceleration.  Toyota later faced several large fines related to the issue and ultimately recalled more than 10 million vehicles worldwide.

Since the Toyota unintended acceleration issue made headlines a chastened NHTSA has been cracking down on lax recall efforts. Major fines have been levied on several other makers, including both BMW and Ford.

Whether GM will now be dunned remains to be seen, but the maker’s own chronology shows that by 2005 it was considering ways to address the problem — though it canceled a plan that year to adopt a different key switch design. The first death was reported in 2007, and by then GM already knew about 10 crashes involving the Chevrolet Cobalt model alone.  The NHTSA also was advised about the problem that year and the investigation could also reveal a failure on the government’s side.

GM officials insist they have radically changed their process of handling safety-related problems since emerging from bankruptcy in 2009, but the new investigation shows that the maker continues to face headaches for the very issues that nearly drove it out of business five years ago.