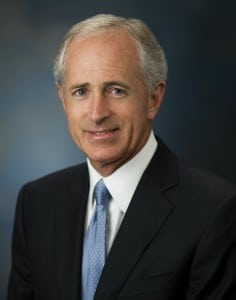 U.S. Sen. Bob Corker said the NLRB could set a bad precedent if it finds in favor the UAW's objection to the election results at Volkwagen's Chattanooga, Tenn. plant.

While some feel that U.S. Sen. Bob Corker was less than truthful when he said that Volkswagen would build a new SUV at its plant in Tennessee if workers voted against UAW representation there, he may never have been more honest today.

“I probably am ‘Public Enemy No. 1’ to the UAW,” Corker (R-Tenn.) told reporters at a breakfast sponsored by the Christian Science Monitor this morning. “There’s no doubt there is some pent up anger towards me.”

VW workers at the plant in Chattanooga, Tenn., that builds the Passat voted 712 to 626 to reject the UAW representation in creating a German-style works council.

Corker, a conservative Republican, said it’s not to appropriate or fair to “muzzle” lawmakers expressing opinions about issues impacting their communities, such as the UAW vote.

“I hope that the NLRB will understand and realize the magnitude of what they are going to be deciding and in no way will try to muzzle public officials who are community leaders from expressing their point of view,” he said, according to Reuters.

The UAW filed an appeal over the election results with the National Labor Relations Board, the federal agency that oversaw the election, claiming that Corker and other Republican politicians tainted the election process with Corker’s aforementioned claim about losing work, which Volkswagen denied, and other comments suggesting that the state would not provide future incentives or even revoke existing ones if the UAW was voted in.

(Click Here for a look at Volvo’s third in its trilogy of concept vehicles.)

It should be noted, and Corker did, that President Obama also commented on the election, although it was behind closed doors. Obama suggested Republican politicians who opposed the UAW in Chattanooga were more concerned about German shareholders than U.S. workers.

The NLRB is investigating the complaints filed by the UAW. The inquiry is expected to take several weeks and could involve at least one hearing, which would likely see an appearance by Corker. If the board finds in favor of the union, it could order a new vote.