But motorists can take steps to improve mpg. 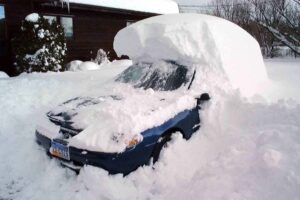 Even if you can dig out, chances are you'll be getting lousy gas mileage this frigid winter.

If it seems like your fuel economy has been lower than normal this winter, it’s not your imagination at work.  Cars, like people, find it harder to get through a cold winter, and that’s especially true for the latest generation of battery-based vehicles, like hybrids, plug-ins and electric vehicles.

New research by the Oak Ridge National Laboratory finds that some models can lose as much as a third of their fuel economy by the time the mercury drops to 20 degrees.  And the colder the weather – or the shorter the trip, the bigger the drop.

The good news is that motorists can take steps to improve the performance of their vehicles when weather turns frigid.

“Cold weather and winter driving conditions can reduce your fuel economy significantly,” says the Oak Ridge’s Bo Saulsbury, in a report on winter driving. “Fuel economy tests show that, in short-trip city driving, a conventional gasoline car’s gas mileage is about 12% lower at 20°F than it would be at 77°F.”

The research center took the rated fuel-economy results of 600 conventional vehicles, as well as 14 hybrids under “normal” warm weather conditions and then compared them to tests at 20 degrees.  The worst drop came from those battery-based vehicles which saw their typical mileage drop by anywhere from 31% to 34% — meaning a 45 mpg model like a Ford Fusion Hybrid might only deliver 30 miles a gallon when the temperature plunges.

(The Big Freeze takes its toll on new car sales in January. Click Here for the full story.)

But even a regular, gas-powered car getting 30 mpg normally might struggle to deliver 24 mpg during short trips when mileage drops the most, a typical 22%, according to Oak Ridge researchers.

And the worse the weather the more that mileage drops.  Lower temperatures are just one of the reasons.  The lab pointed to other factors, including:

There are other reasons why cold weather takes its toll on fuel economy.  Oil and other vehicle fluids become thicker and increase internal friction.  Your car will take longer to heat up to its optimum operating temperature.  You’ll use more energy to power blower fans, defrosters and seat heaters.  Winter gasoline blends tend to have lower levels of energy per gallon than summer blends.  And motorists are more likely to let a vehicle idle – getting zero miles per gallon – as they warm it up.

Then there’s the battery.  Even in a conventional vehicle, it’s likely to be less efficient when it gets cold, requiring the alternator to run more frequently.  And in a hybrid, plug-in or electric vehicle, a cold battery will hold less energy, limiting both range and energy efficiency.

(Keeping your cool on winter roads. Click Here for tips on how to drive safely despite the worst weather.)

According to Oak Ridge research, there are a number of steps you can take to improve your mileage during the winter, however. Among other things, that means parking your car where it can stay warm and combining trips rather than making lots of short ones, especially if you’re running errands, so the vehicle’s engine and fluids will warm up.

And if you have a plug-based vehicle, like a Chevrolet Volt or a Toyota RAV4 EV, pre-heat the cabin, Oak Ridge researchers say, so you’re warming the car up while it’s plugged in rather than while it’s driving, draining range in the process.