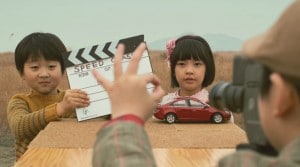 Chevrolet is keeping a high profile during big television events, like this year's Oscar ceremony. The division is showing a 60-second film from South Korean filmmaker Jude Chun that features the 2014 Chevy Cruze.

Chevrolet plans to make another advertising splash during another huge television event: the Oscars.

The maker is airing a 60-second film by South Korean independent filmmaker Jude Chun, who beat out 23 other filmmakers for the privilege of getting his movie shown during the Oscars.

“We asked filmmakers to create a short film that celebrates simple but significant moments in life that demonstrate the power of hope and possibility,” said Tim Mahoney, Chevrolet’s global chief marketing officer, in a statement. 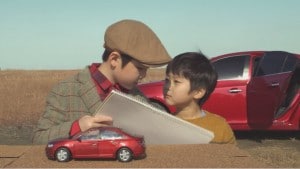 Chevrolet is showing a short film about the making of the movie, "Speed Chaser" during this year's Oscar telecast.

“A story about filmmaking, created by an aspiring filmmaker, captures the ‘Find New Roads’ mindset and is a perfect fit for The Oscars.”

The film, created with the support of Eunhae Cho and Sunyoung Hwang, features the 2014 Chevrolet Cruze. The spot tells the story of young filmmakers using their imaginations to create a short film, “Speed Chaser.” It follows the children as they navigate their way through the filmmaking process, including costuming, makeup, props, sound and special effects.

With an advertising schedule that included a spot on the Super Bowl and ads for its new sport utility vehicles on the telecasts of the Winter Olympics, Chevy hopes to continue getting positive feedback for its products with the current strategy: putting itself in front of as many television views as possible.

The Oscar telecast attracts 40 million viewers on average. The 2014 Super Bowl was nearly three times that with 111.5 million viewers and the Olympics saw nightly viewership range from 13.3 million to 21.9 million people during its run.

After the Super Bowl ad for the new Chevrolet Heavy Duty pickup truck generated a huge response on social media, Mahoney noted. “You could track the response in real time,” he said.

However, it’s not enough to simply put the ads on at the right time. They must strike a cord with viewers and Chevrolet managed to do that with a variety of spots, including some featuring same sex couples with families. The spots clearly pushed beyond the boundaries traditionally used in television advertising.

The advertising on the Super Bowl, the Olympics and now the Oscars gives Chevrolet a solid foundation on which to build its marketing effort in the months to come. “It puts us in a strong position,” noted Mahoney, who came to General Motors from Volkswagen last year.

Chevrolet isn’t limiting itself to television spots during prominent American events. With 60% of Chevrolet’s sales outside the United States, it’s looking to make an impact in other ways. One of those is to follow through with the controversial marketing tie with England’s Manchester United soccer team, which was negotiated by Joel Ewanick, who was fired in 2012. The $559 million deal with the team played a major role in Ewanick’s dismissal by then-Chairman Dan Akerson.

(VW rocks out with T-Roc concept. For more, Click Here.)

Even though, GM decided to pull the Chevrolet brand from Europe to give the Opel brand more room to maneuver, Chevrolet will remain a major sponsor of Manchester United. Beginning in August – after the World Cup in Brazil later this year — a gold Chevrolet logo will appear on the jerseys worn by Manchester United players in matches that are now telecast throughout the world, Mahoney said.

(Click Here to get details on Corker’s dismay with NLRB.)

Even with Chevrolet gone from Europe, the deal will help Chevrolet sell vehicles. More than half of Manchester United’s followers on social media are in China, Thailand and other countries in Southeast Asia where Chevrolet expects to expand sales, Mahoney said.

(To see how GM is dealing with the federal probe into its ignition-related recall, Click Here.)

Mahoney added Chevrolet’s next big advertising push will involve promoting the 4G connectivity in GM vehicles, starting in the second half of the year. The 4G capability will turn every new vehicle into a rolling Wi-Fi hot spot.