Audi Hopes to Steal the Show with All-New TT 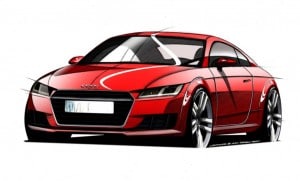 While its dimensions are relatively compact, Geneva’s PALExpo Convention Center will make plenty of big news next month when the annual Geneva Motor Show rolls into the city by the lake.  But Audi is hoping to deliver a real show-stopper when it lifts the cover’s on the all-new, third-generation remake of its little TT.

The basic shape is likely to seem familiar to Audi fans, with the time-tested crescent roofline and sloping hood, but the overall look is nonetheless substantially updated, the German maker suggesting with these sketches that the 2015 model will introduce us to its latest design language.

Among the highlights of the new Audi TT are the Matrix LED headlamps and the “virtual cockpit interior.”  The design advances some earlier design cues, as well, such as the creased hood of the R8, the new TT wearing the familiar four-ring Audi logo on its hood, rather than the grille.  There are also some details lifted from the Allroad Shooting Brake Concept introduced during the Detroit Auto Show a little more than a month ago. 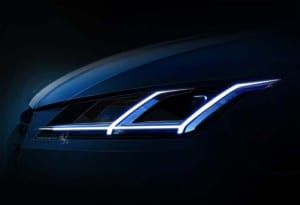 It’s been 16 years since the original Audi TT debuted and the maker is clearly hoping to regain some of the momentum it had in its early years with a more dynamic and athletic design.  Some of the most significant changes can be seen from the front, the new TT getting a more broad and flattened Singleframe grille, along with the distinctive headlamps.  Two creases from a distinctive V-pattern on the hood to suggest the power underneath.

The headlights mirror the divider struts that rise out of the new TT’s large air inlets, acting as reflectors for the daytime running lamps.  The new coupe will be offered with two different LED headlamp options, including the Matrix LED technology that features individual, controllable bulbs that can track the car’s movements.

In back, new struts echo the headlamp design and stay on all the time, adding another distinctive cue.  All engine versions have two large exhaust tailpipes mounted in the diffuser, though the TTS has four pipes in all.

(Porsche ready to begin work on all-new, 7th product line. Click Here to find out what it has in mind.) 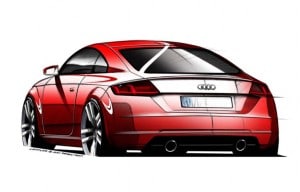 Lighting is a central part of Audi's design language - something even more apparent on the 2015 TT.

In some ways, the new Coupe has an almost retro feel, picking up some details from the very first TT, including the sill and wheel arch designs.  But the overall look is meant to give the gen-three model a more aggressive and powerful feel.

Audi’s use of LED front accent lights quickly became a design detail that virtually every automaker has since copied.  Lighting is clearly a key element in the design of the new TT, inside and out.

There’s also an emphasis on new technologies, and the new TT drops the central MMI monitor, replacing it with the reconfigurable new virtual cockpit.  The overall look of the dash, Audi suggests, is intended to look like the wing of an aircraft.

Audi apparently plans to maintain a few secrets, including specifics on the new TT’s engine options and suspension package.  But it won’t be a long wait, the press days at the 2014 Geneva Motor Show coming up in barely 10 days.

(Audi A3 among the World Car of the Year finalists. Click Here to see what else is on the list.)