Volkswagen Getting into Hot Hatch Game with Golf R

But you’ll have to wait. 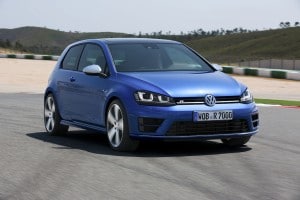 Performance hatchback fans have been waiting to see if the Golf R will come to the U.S. It will. Next year.

Volkswagen is getting into the hot hatch market, finally confirming it will bring the gen-four version of its Golf R to the U.S. market. But expect to wait. With American drivers still waiting for the latest version of the mainstream Golf, the new R won’t reach U.S. showrooms until the first quarter of next year.

Is it worth the wait? For many fans, the answer is likely to be a resounding yes considering this will be the fastest Golf ever, Volkswagen claims. At 290 horsepower it gets a 34 hp bump from the previous-generation Golf R. The turbocharged 2.0-liter inline-four will meanwhile make 280 pound-feet of torque.

By the way, how you feel about this will likely reveal whether you see the gas tank as half-empty or half-full. The Euro-spec Golf R actually gets another six horsepower for reasons VW has not revealed. 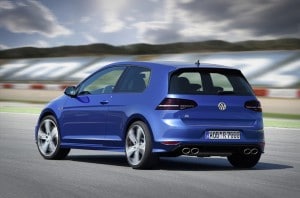 You’ll be able to channel that power through either a six-speed manual or a six-speed DSG dual-clutch gearbox, which may give stick fans pause considering it will deliver 0 to 100 kph (0 to 62.5 mph) times of just 4.9 seconds – a full 0.4 seconds quicker than the six-speed manual.

The new Golf R promises to put all that power to the pavement thanks to the newest-generation 4Motion all-wheel-drive system, standard on the Golf R. Using the newest Haldex torque-shifting system, it also decouples the rear axle when you’re cruising on dry pavement. But if conditions demand, as much as 100% of the torque can be pumped to the back wheels.

This approach is expected to yield a projected 31 mpg, four more than the old Golf R.

The next Golf R will ride on a new sport-tuned suspension that brings you 0.8 inches closer to the pavement. Optional is the new Dynamic Chassis Control system that features four settings, including a Race mode that essentially disables all those electronic management systems, such as electronic stability control.

Visually, the new Golf R will be distinguished by details such as unique front and rear fascia, a rear diffuser, unique side skirts, and 18-inch aluminum alloy wheels.

Among the interior touches, the hot hatch features carbon fiber accents and a new sport seat. The gauges have also been customized for the Golf R model.

(Click Here to VW and other automakers are keeping Germany’s economy afloat.)

The new model will make its American debut in Detroit next week at the North American International Auto Show. In European spec it first debuted at the Frankfurt Motor Show last autumn.