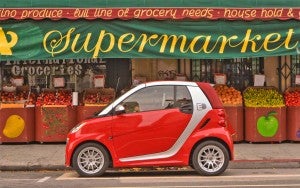 The 2-seat Smart ForTwo Electric Drive battery car is the most environmentally friendly vehicle on American roads, according to the 2014 Greenest Vehicles list, with an assortment of battery-electric vehicles, plug-ins, hybrids – and one natural gas model – rounding out the Top 10.

The Smart ED, as it’s often called, scored a record 59 out of 100 possible points, according to the American Council for an Energy-Efficient Economy.  But Toyota and Honda overwhelming dominate the ACEEE list of “Greenest” models.  At the other end of the spectrum, Chrysler’s Ram 2500 gets razzed as the “Meanest” vehicle on the market with a score of just 18.

“We’ve had such an influx of hybrid and electric vehicles in recent years that the race to earn a spot on the “Greenest” list is more competitive than ever, particularly for conventional vehicles,” said ACEEE lead vehicle analyst Shruti Vaidyanathan, adding that, “It’s encouraging to see automakers investing heavily in eco-savvy vehicles on the whole.” 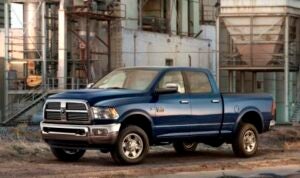 The complete list of Green to Mean models can be found on the Greencars.org website which assigns each vehicle a so-called “Green Score” based on such factors as emissions of smog-causing gases like NOx, as well as the amount of greenhouse gases a vehicle is expected to produce during the normal lifecycle.

According to the ACEEE, low-volume vehicles are “not eligible” to be considered for the Greenest Vehicle list, even though the group’s top choice, the Smart Electric Drive, has generated sales measuring only in the 100s.  And the second-lowest model, the Bugatti Veyron, a 253 mph supercar, is expected to end up its own decade run in 2015 with total sales of only around 500 units.  The Bugatti had a score of just 19, according to the ACEEE.

(Toyota hopes to replicate the success of the Prius with its new hydrogen car. Click Here to find out more.)

All told, the Greenest Vehicles chart offers up rankings of more than 1,000 different vehicle models and configurations this year.

But the Top 10 list is made up almost exclusively of battery-based vehicles.  Second on the list is the Toyota Prius C, followed by the Nissan Leaf battery-electric vehicle.  Toyota has three different models among the ten leaders, also including the original Prius hatchback and the newer Prius plug-in hybrid, ranked fourth and seventh, respectively.  The Honda Civic Hybrid comes in at 6th, followed by the Lexus CT 200H, at sixth.

The two vehicles powered solely by internal combustion include the ninth-ranked Honda Civic Natural Gas vehicle – which scored just ahead of the little Honda Insight hybrid, at 10th – and the newcomer to the ACEEE’s Top 10 list for 2014, the Mitsubishi Mirage.