Mulally Not Leaving Ford for Microsoft

CEO staying until at least late 2014. 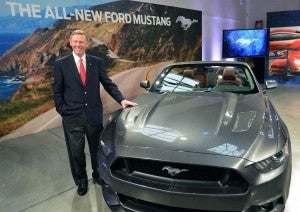 Ford CEO Alan Mulally at the debut of the 2015 Mustang.

Ford Motor Co. CEO Alan Mulally has broken his silence and quashed rampant rumors suggesting he would leave the suburban Detroit automaker for a job as the next chief executive of software giant Microsoft.

Mulally, a former Boeing executive, has been widely credited with turning around Ford during his seven years in Motown, and it had been suggested that he could lend his organizational skills to Microsoft following the retirement of CEO of Steve Ballmer who last year announced plans to step down no later than August 2014.

Until now, Mulally had avoided directly commenting on the rumors that he was a primary candidate for the Seattle job, but the Ford board of directors was said to be increasingly concerned about the potential distraction the headlines were creating, both for Mulally and for the automaker itself.

“I would like to end the Microsoft speculation because I have no other plans to do anything other than serve Ford,” Mulally said in an interview with the Associated Press. Asked directly whether this meant he was going to remain at Ford, Mulally added that, “You don’t have to worry about me leaving.” 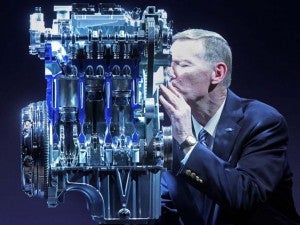 (Ford’s “aluminum-intensive” F-150 likely to be a star at the Detroit Auto Show. Click Here for the inside story.)

The 68-year-old executive, originally trained as an aeronautical engineer, spent 36 years with Boeing Co. He rose to become the president of the company’s commercial aircraft operations before being personally recruited by Ford Motor Co. Chairman and family heir William Clay Ford Jr.

It was a critical time for Ford which, like its cross-town rivals, was running ever-deeper into the red and worried that it might have to declare bankruptcy – the path ultimately taken by both General Motors and Chrysler. What Mulally discovered was not just a company running up increasingly serious losses but one with a dysfunctional corporate culture in which personal ambition was considered a higher priority than the company’s welfare.

In an early interview with TheDetroitBureau.com, Mulally recalled his first regular Thursday meeting with senior Ford managers during which all agreed everything was fine. “Then how come I’m going to have to report the biggest loss in Ford history?” the then-new CEO blurted out. At the next Thursday meeting, things began to change, Mark Fields, then Ford’s President of the Americas, raising his hand to report a problem with a new product launch.

“Good exposure,” Mulally responded, triggering other executives in the room to reveal issues they also were facing.

Ford’s troubles were far from over.  In fact, Mulally was one of the three Detroit automotive CEOs to fly into Washington, D.C. in late 2008 to ask for federal aid. That ultimately led to the bailout of GM and Chrysler, though Ford had previously lined up enough of a credit line to squeak through without a federal hand-out, something many analysts credit with the maker’s improved reputation – and sales.

Since the industry began to bottom out, Ford has generated $32.9 billion pre-tax profits and seen its stock price surge from barely a $1 low to a $15.38 close on Tuesday trading.

That’s not to say Ford doesn’t have problems. The maker recently forecast its earnings will dip in 2014, in part due to increased investments in products and an aggressive expansion program in China. Ford also has been hammered for quality lapses over the last several years – ironically, many of the complaints involving the Sync infotainment system the maker developed with the help of Microsoft.

(Ford projects earnings to decline in 2014. Click Here to find out why.)

The software giant has been aggressively courting the auto industry and had initially been seen as a leader in in-car technology but it is facing increasing challenges, notably from Google which this week announced that several key automakers will now use a mobile version of the Android operating system in their vehicles.

Meanwhile, analysts say that while Microsoft is still a quite profitable company it faces some of the internal challenges that had crippled Ford by the time Mulally took over at the automaker, notably the constant squabbling between different corporate business units. Adopting the global One Ford strategy that Mulally put together was seen as a potential fix for Microsoft.

Neither company ever formally confirmed that the executive was in the running to replace Ballmer, a controversial and often blustery executive who generated a strong upward jump in Microsoft stock when he announced his planned retirement last year.

But tech industry insiders repeatedly reported on supposed inside goings-on that positioned Mulally as the front-runner to replace Ballmer. The problem was that the transition in Seattle was to take place months before the end of 2014 timeframe that the Ford CEO had previously laid out as the earlier he would leave Detroit.

Why did Mulally suddenly decide to speak out after months of sidestepping the question? One official suggested he may have simply gotten tired of being asked. It is also possible that the executive wanted to end the ongoing speculation before it would become a distraction at next week’s North American International Auto Show.  Ford is expected to be one of the stars of that event when it unveils the new, aluminum-intensive remake of its F-150 pickup, a design that could improve fuel economy by as much as 5 mpg.

Significantly, Mulally did not specifically address whether he actually was a leading candidate for the Microsoft job.

Equally significant, even if he does not leave for Seattle, the CEO might not remain at Ford headquarters in the suburb of Dearborn for much longer. He had previously only promised to stay on through the end of 2014. And even then, Mulally had been cutting back on his duties, in late 2011 announcing he would focus on broad strategy issues while turning day-to-day management responsibility over to a new Ford Chief Operating Officer.

The man in that new job was Mark Fields, the first to embrace Mulally’s new management style. Fields is still considered the frontrunner for the Ford CEO job, but it now appears he’ll have to wait just a little longer.