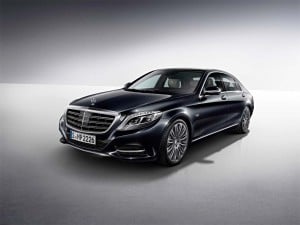 Mercedes-Benz is pushing the S600 as the Maybach replacement until the Pullman arrives next year.

The death of the ultra-exclusive Maybach brand left Daimler AG in a quandary: how to compete against rivals like BMW-owned Rolls-Royce and Volkswagen’s Bentley. The plan calls for stretching the time-tested Mercedes-Benz brand even further up-market – even as it also dips lower than ever into the luxury segment with the likes of the new CLA and GLA models starting at under $30,000. Pushing its top price to 10 times that much is going to be a real test of the Mercedes tri-star’s pulling power.

We’re getting a sense of how the German maker plans to do it with this week’s launch of the new Mercedes-Benz S600. It’s the latest – and soon to be most-expensive – version of the flagship S-Class offered. But it won’t have that distinction for long. The new S600 sets the stage for the launch, later this year, of the Pullman, the stretch model that will be the true replacement for the old, and largely unloved Maybach.

If the new S600 is the scene-setter, it does so in grand fashion. While there are plenty of new, high-line touches, the heart of the new beast is its bi-turbo V-12 engine which powers a sedan offered only in long-wheelbase form with a luxurious complement of equipment full of the latest connectivity and active safety technology as will as other advanced features Mercedes hopes will justify a price tag that could top $150,000. 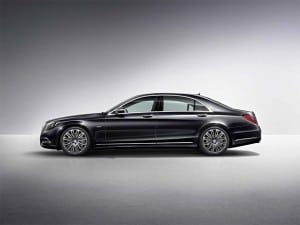 The 2015 S600 is laden with technology that makes it one of the most advanced vehicles available.

“The S-Class has always been the embodiment of our claim to deliver the very best in terms of both technology and design,” emphasized Ola Källenius, executive vice president of Sales and Marketing at Mercedes-Benz Cars.

“And our flagship model, the S600, epitomizes the focus of our development work, the ‘Essence of Luxury,’ in a way that no other model can. Our customers in North America and Asia in particular will enjoy this new top model with its exciting V12 engine.”

With a power output of 523 horsepower, the new 6.0-liter V12 bi-turbo engine in the S600 packs a bigger punch than its predecessor’s 510 hp. The maximum torque of 612 lb-ft is available from 1,900 rpm. The S600 now for the first time features the ECO start/stop function as standard.

The long list of standard equipment on the S600 reinforces its role as a flagship model. The magic body control suspension with road surface scan cameras to alert the suspension to the road conditions and the Driving Assistance Package, which comprises Active Lane Keeping Assist, Active Blind Spot Assist, with Cross-Traffic Assist, distronic plus with steering assist, which can let the car drive autonomously under limited conditions, pedestrian recognition and pre-safe braking systems are all part of the package. 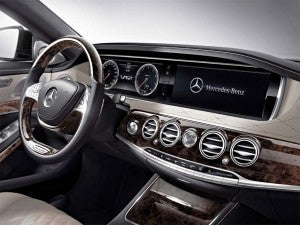 The Mercedes S600 is filled with luxury appointments as well as safety technology making it one of the safest vehicles on the road.

The system is able to brake autonomously at speeds of up to 124 mph, thus reducing the severity of collisions with slower or stopping vehicles. The system also brakes in response to stationary vehicles at a speed of up to 31 mph, and can prevent rear-end collisions at up to 25 mph.

Daimler CEO Dieter Zetsche has said that system allows for near autonomous driving.

A head-up display is also standard equipment on the S600. As in a jet fighter, it displays important information directly in the driver’s field of view on the windshield, ensuring that the driver’s attention is distracted less from the road ahead. The system provides information on speed, speed limits and navigation instructions.

(Click Here to see the new Targa Porsche is bringing to Detroit.)

All the functions of the S600’s head up unit can be controlled at the touch of a finger, as with a smart phone, from the new touchpad. In addition, the touchpad allows handwritten letters, numbers and special characters to be entered in any language that is available on the head up unit. The touchpad offers an additional, full-function input option over and above the existing Voice Control System.

The S600 will also come with an optional electric windshield-heating unit, which is designed to work in to clear way ice or snow without scrapping the windshield by hand and will ensure clear forward visibility within moments.