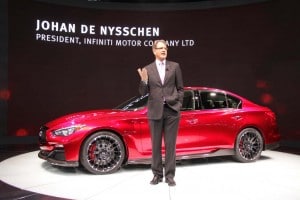 Johan de Nysschen, Infiniti president, said the maker pulled the plug on its LE electric vehicle, focusing instead on vehicles like the Q50 Eau Rouge concept.

While the Eau Rouge is, for now, just a concept vehicle, it won’t be for long, promised Johan de Nysschen, president of the Nissan luxury brand. Not only is Infiniti looking to develop a production model, but others that will flesh out the brand’s already expanding line-up.

“Can this car be put into production? I absolutely insist,” said the South African-born executive who took over the Infiniti brand in late 2012. “But,” he quickly cautioned, “We have a lot of work to do.” 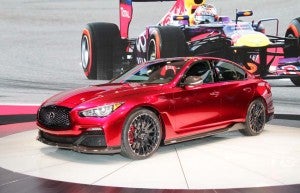 (Click Here for more on the Eau Rouge Concept.)

The first order at hand is coming up with a powertrain that can live up to expectations – which would like mean something well in excess of 400 horsepower. The good news for Infiniti is that it has a lot of options. There are plenty of engines in the Nissan family, perhaps even the one used in the GT-R supercar, though it would require a lot of engineering effort to stuff it under the Q50’s hood.

There’s also the possibility of tapping Daimler AG – the parent of Mercedes and its high-performance AMG arm – which now has formed an extensive alliance with Nissan. In fact, several future Infiniti models will use the small luxury car platform developed for the new Mercedes CLA and GLA models.

“We discuss all sorts of technology cooperation projects with Daimler,” noted de Nysschen, who said the goal is to come up with an engine – wherever it’s sourced – that will develop “an avalanche of eyeball distorting torque.”

A production version of the Q50 would – will – not be the only performance model in the Infiniti line-up, de Nysschen promised. The show car, if anything, is “the answer to the question of whether you can be a serious global luxury brand without a performance division.” In a word, he said, “No.”

(For more on the Lexus RC F, Click Here.)

There are plenty of unanswered questions, such as when the Q50 Eau Rouge might make it into production, how many other performance models might follow – and whether the Eau Rouge name would be kept.

Competitors have generally opted for something simpler: BMW’s M, for example, Mercedes AMG, Cadillac V-Series and the Lexus F.

Even without a fully developed performance line, Infiniti is clearly set to start punching out more models. And that’s no surprise considering what German competitors are up to. Consider that Audi – where de Nysschen worked before joining the Japanese – expects to boost its current global model count from 49 to 60 over the next few years.

(The top 10 debuts to watch at the Detroit Auto Show: Click Here.)

One of the first additions will be a crossover based on the Q40 Concept unveiled at the recent Frankfurt Motor Show.

Eventually, de Nysschen said, Infiniti will also have some battery models in the line-up, but not anytime soon. It last year announced that it would delay indefinitely the LE model that was to be based on the mainstream Nissan Leaf model.

The LE, de Nysschen revealed during an auto show conversation, “is not included in our mid-term production plan, which means it will not reach the market until late in the decade.”

That’s a surprise, and for several reasons.  For one thing, Nissan Motor Co. CEO Carlos Ghosn is one of the auto industry’s most vocal proponents of battery power. Meanwhile, key competitors, including Audi, Mercedes, BMW, Cadillac and Lexus, have been ramping up their own battery-car programs.

On the other hand, with the exception of the Tesla Model S, demand for luxury electric vehicles has been minimal, and Infiniti insiders have said the maker doesn’t want to bring to market an electric vehicle suffering from compromises in range, performance and charging times. The hope is that better batteries that can resolve those problems will become available by late in the decade.

So, for now, Infiniti will stick to gasoline when it comes to powering up.