How Low Can They Go? Competition Heats up for Entry-Lux Buyers 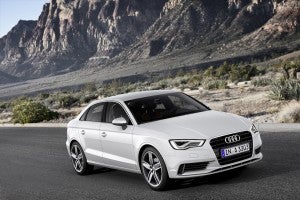 The all-new 2015 Audi A3 is coming to America in four different versions.

Audi will introduce its completely redesigned 2015 A3 sedan at a starting price of just $29,900, about $4,000 lower than the maker’s current base model, the A4.  That means Audi also will match the price of the new Mercedes-Benz CLA, currently one of the hottest products on the U.S. market.

The Audi A3 and Mercedes CLA are part of a wave of new entry-lux vehicles – a list also including makers like Lincoln, Cadillac and Lexus – that are meant to attract buyers who might traditionally opt for mainstream brand offerings but who would like a vehicle with a more upscale cache.

“We’re seeing buyers we’ve never seen before in our stores,” Steve Cannon, CEO of Mercedes-Benz USA, says about the impact of the new CLA coupe-like sedan. The model is perhaps the German maker’s biggest success story in the U.S. ever, with an estimated 80% of its buyers coming from outside the Mercedes brand. 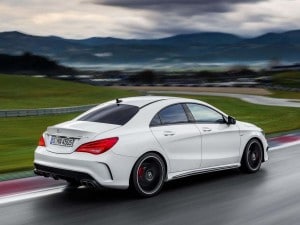 Audi certainly hopes to emulate that success which could be critical to the smaller luxury brand’s ambitious expectations.  The maker still lags behind the market’s “big three” luxury leaders, Mercedes, BMW and Lexus, but scored a 13.5% jump in sales last year, reaching a record 158,061.  It is aiming to top 200,000 during the second half of the decade, and the A3 is expected to play a critical role.

(Concept cars pack ’em in at the Detroit Auto Show. Click Here to check out some of the coolest.)

The launch of the A3 “makes the whole landscape a lot more competitive” in the entry-luxury market, one of the fastest-growing segments in the U.S. and, indeed, in much of the world.  And it will grow even more so in the near future with the upcoming launch of the redesigned BMW 1-Series.

In some ways, these new models actually fill a gap that the manufacturers have themselves created, says auto analyst Dave Sullivan, of AutoPacific, Inc.  “They’ve elevated the prices, and grown the size” of many older models that once served as entries into their brands, like the older Mercedes C-Class and Audi A4.  Cadillac launched an all-new version of its CTS for 2014 to give more breathing room to the smaller ATS it introduced in 2013.

(Automakers muscling up at this year’s Detroit Auto Show. For more, Click Here.)

Nonetheless, Sullivan says “it’s a little odd” and unexpected “to see the Germans get so competitive in this crowded market,” in some ways reversing roles with the Japanese whose luxury brands originally debuted in the 1980s as bargain alternatives.  The lowest-priced Lexus, the IS250, now goes for $35,950.

Only the entry-level Acura ILX, at an MSRP of $26,900 comes in under the new German offerings, but it boasts far fewer features and the upscale Honda Motor Co. brand doesn’t carry nearly the cache of its German rivals, analysts stress.

The reality, however, is that these entry prices are largely meaningless, cautions Stephanie Brinley, a veteran analyst with IHS Automotive, noting, “You’ll have a hard time finding a car at that price.”

(Audi’s new Allroad Shooting Brake concept defies easy categorization. What would you call it? Click Here for a closer look.)

While models like the Mercedes CLA and Audi A3 are reasonably equipped to start with – the A3 including leather seats, a retractable touch screen, 4G connectivity, sunroof, xenon headlights and a Bang & Olufsen audio system as standard gear — most customers are loading up with options.  Audi also will offer a more compelling engine package, allowing buyers to upgrade from a modest 1.8-liter inline-four to a 2.0-liter turbo-four for an extra $3,000.

Mercedes, meanwhile, has a high-performance alternative, the CLA45 AMG, that starts at $47,450.

Even if a buyer were to want a stripped-down version, good luck finding it, the analysts warn. With less than a 10-day supply in dealer showrooms – compared to an industry norm closer to 60 days – Mercedes has little incentive to build many of those base models, and few dealers are ordering them.

According to data collected by Kelley Blue Book, the average transaction price for a new Mercedes CLA is coming in closer to $36,000.

But that’s not unique to luxury makers.  Even a Ford Focus can push into the $30,000 range when loaded up with options.  And for many buyers, the extra money is worth it to trade in the Detroit maker’s Blue Oval badge for the likes of a Mercedes tri-star or the four rings of an Audi.