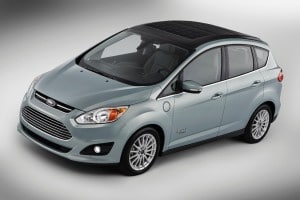 Automakers are struggling to find ways to make it cheaper and easier to recharge electric vehicles and Ford plans to show off one possible alternative that replaces the plug with the sun.

The Detroit maker plans to reveal a concept version of its current plug-in hybrid, the C-Max, at the Consumer Electronics Show in Las Vegas that uses a solar panel on its roof to recharge the battery.

Called the C-Max Solar Energi, it can collect a day’s worth of sunlight and get the same charge as the current C-Max Energi gets when plugged into the wall –albeit needing a full day’s strong sun to generate what you could get from a wall plug in four hours. Ford believes that this type of charging could account for 75% of all driving car owners currently do during a typical day. 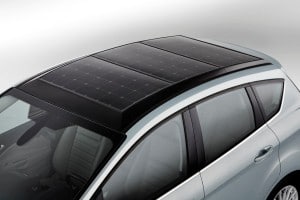 Using new solar cells and a solar concentrator on the C-Max Solar Energi's roof, the sun can fully charge the car's battery during the course of a day.

With a full charge, the Solar Energi Concept is estimated to have the same total range as a conventional C-Max Energi: up to 620 miles, including up to 21 on battery power alone. Additionally, the vehicle still has a charge port so it can be plugged in on a cloudy day — or to get a quicker charge.

While it wouldn’t speculate on any type of mileage rating for the C-Max Solar Energi, the current C-Max Energi gets an EPA-estimated 108 MPGe city and 92 MPGe highway, for a combined 100 MPGe.

Putting solar panels on roofs isn’t really new. Toyota did it with the Prius to power some of the vehicle systems, such as climate control. Also, the defunct Fisker used them to get another five miles range out of the ill-fated Karma.

A fresnel is a compact lens originally developed for use in lighthouses. Similar in concept to a magnifying glass, the patent-pending system tracks the sun as it moves from east to west. It draws enough power from the sun through the concentrator each day to equal a four-hour battery charge, which is about eight kilowatts.

The car also utilizes a newly designed solar cell developed with SunPower, which has been Ford’s solar technology partner since 2011. The ultra-thin cells are metal on the back, which allows them to bend. At the same time, since they’re metal they add to the rigidity of the roof structure.

(Click Here to see how Ford claimed victory in the brand sales competition.)

By using renewable power, the Ford C-Max Solar Energi Concept is estimated to reduce the annual greenhouse gas emissions a typical plug-in owner would produce by four metric tons, which is what the average U.S. household produces in four months.

For the moment, however, Ford is not discussing whether it has specific production plans in the works.