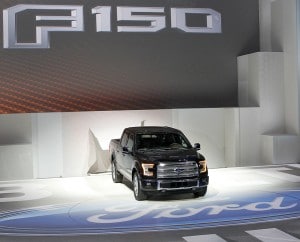 With Joe Louis Arena – the home of the Detroit Red Wings – as the back drop, Ford Motor Co. kicked off the North American International Auto Show by revealing the new – and lighter –  Ford F-150.

“We know our truck customers,” said Joe Hinrichs, who noted the F-Series has been the best-selling vehicle in the U.S for 32 consecutive years and the best-selling truck for the past 37 years.

“When you’re the leader you set the standards and then you exceed them,” said Raj Nair, who said the new truck contains more than 11 major technological firsts, including a new frame of lightweight steel and a unique all-aluminum body that reduce the trucks overall weight by 700 pounds, which improves fuel economy and overall performance. 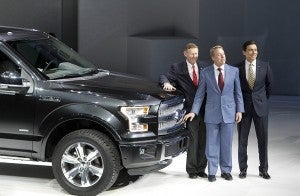 The impact is substantial. Ford isn’t releasing fuel economy numbers yet, but the general industry rule of thumb is that each 100 pounds of mass a vehicle sheds translates into about one mile per gallon better fuel economy.

In today’s market, even with fuel prices down sharply from last year’s peaks, that alone could prove a game-changer. The aluminum-intensive design has other advantages: the unique aluminum alloys used in the 2015 truck are actually more ding- and dent-resistant than conventional steel.

Before the introduction of the new F-150, Ford Executive Chairman Bill Ford noted that the brand is winning over new customers all over the world, including markets that Ford is entering for the first time.

“People are passionate about the Ford Blue Oval,” he said.

Alan Mulally, Ford president of chief executive officer, also said the Ford is just beginning to realize the benefits of the “One Ford” Plan that has increased the broad efficiency of Ford’s operations throughout the world.

“Ford is also being recognized as a technological leader,” added Mulally with the introduction of features such as Ford Synch and the Eco-Boost engine family.

(Click Here to for details about Alan Mulally’s decision to remain at Ford.)

Mark Fields, Ford chief operating officer, said the payoff from One Ford has been a series of new vehicles that have impressed customers globally, including the Ford Fiesta, Focus and Fusion and its strong lineup of utility vehicles that is now being augmented with the introduction of the Transit Connect vans.