“Most” Chevy models will offer in-car access points starting in 2015. 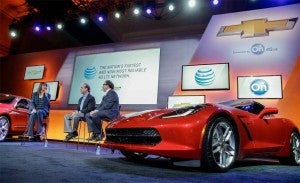 Chevrolet will begin transforming “most” of its models into high-speed Internet access points when it begins offering in-car 4G LTE capabilities starting next year.

General Motors’ largest brand is teaming up with AT&T to offer the in-car connectivity as a way to improve access to smartphone apps and other services.  Motorists will be able to cruise music services like TuneIn, watch movies on laptop computers and tablets, use web-based phone services such as Skype and access new “car concierge” services, Chevrolet revealed during a news conference at the annual Consumer Electronics Show, or CES, in Las Vegas.

“We will be building in 4G LTE technology in most of our (Chevrolet) portfolio in the U.S. and Canada, everything from an entry-level hatchback on up,” Tim Nixon, GM’s Chief Technology Officer, said during a media background briefing.

The rollout will begin in the 2015 model-year with the Chevrolet Corvette, Impala, Malibu and Volt models.  Chevy will follow later with the Equinox, Silverado, Silverado HD, Spark and Spark EV. The new feature will be installed as standard equipment – as is the case on many GM models with its OnStar service – but pricing to operate the service has not yet been announced.  The OnStar technology currently costs $199 a year or more to subscribe to depending upon the features chosen.

As part of the 4G LTE rollout, GM will also integrate a growing number of smartphone-based apps into its infotainment system.  These will include streaming audio services iHeartRadio, NPR, Slacker, TuneIn and Kaliki, a Weather Channel app, a Priceline.com app that will allow motorists to book hotel rooms on the go, and Glympse, an app that lets motorists share their location with friends. Also on tap, two concierge-style services: Cityseeker and Eventseeker.

“New applications will be made over time as we work over time with other partners,” said Mary Chan, president of GM’s Global Connected Consumer business unit.

GM is one of a number of makers racing to increase the number of smartphone apps that can be paired with its in-car infotainment system. It announced a new app framework last year designed to make it easier for software developers. At the time, it also revealed that buyers of several small Chevy models, such as the Sonic, could access a new smartphone-based navigation app costing just $50, rather than pay the typical $1,000 price tag for a navi system built into the car itself.

The in-car 4G system will be offered with a variety of different data plans, according to Chevrolet. Among other things, AT&T customers will be able to add the vehicle as an additional device on a MobileShare data plan.

While Chevy’s announcement is the broadest by any automaker to date it is just one of a growing number of manufacturers to offer hotspot access inside a vehicle.  That approach is currently available on a number of Audi models, for example, as well as on the latest version of Chrysler’s Ram 1500 pickup truck.

Industry analysts expect to see the technology becoming even more widely available going forward as infotainment systems become relatively ubiquitous in the industry.  The race to add smartphone-based apps hasn’t always gone as smoothly as makers would like because of the problems with fluctuating cellphone reception. A motorist might suffer repeated drop-outs during a drive through the country – or in a city where large buildings can disrupt connections.

“We’ve never really considered a vehicle a platform before,” said Nixon, “but with this, we’re considering it a platform for content – things we’d never thought about before as an industry.”